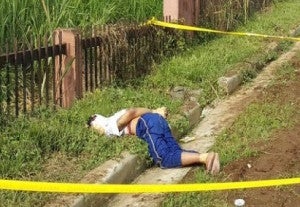 SAN PEDRO CITY, Laguna — Police recovered two sachets of suspected “shabu” (methamphetamine hydrochloride) and drug paraphernalia near the body of an unidentified man believed to be a victim of summary execution in Bacoor City in Cavite province on Sunday.

A report from the Calabarzon (Cavite, Laguna, Batangas, Rizal, Quezon) regional police said the body was found at 1:45 a.m. in Barangay Alima.

The victim, whose hands and feet were tied and whose face was covered with packaging tape, was wearing a striped shirt and a pair of denim pants.

In Batangas province, a drug suspect died in a shootout with policemen during a buy-bust operation in Barangay Buso-buso in Laurel town, on Saturday.

Police said Pedro Malabanan, who was on the Laurel police’s drug watch list, realized he was dealing with policemen and tried to escape through the back door of his house while aiming his gun at the lawmen.

This prompted policemen to shoot back, hitting and killing him.  SFM