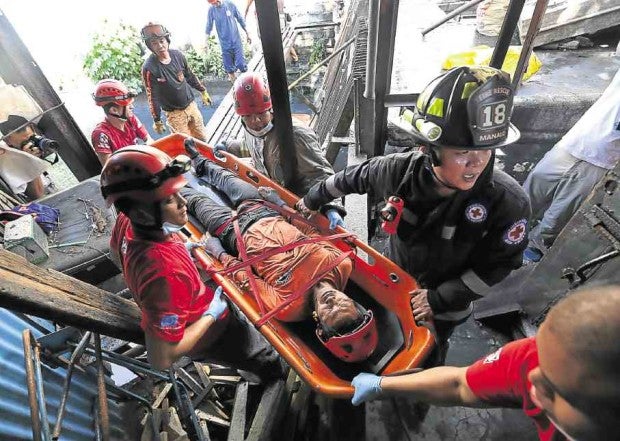 ESTERO EMERGENCY Rescuers pull out one of the injured at Estero de Balete in Ermita, Manila, on Saturday. MARIANNE BERMUDEZ

A Barangay tanod (village watchman) was killed and 11 others were injured while taking part in a waterway clean-up drive in Manila on Saturday, after a concrete platform collapsed under the weight of the garbage collected from a creek.

“They were putting the (collected) waste on an improvised platform which gave in and landed on some people underneath,” Yu told the Inquirer.

The official identified the fatality as Alfred Quijano, who he said was crushed to death by the platform. Quijano was brought to Manila Doctors Hospital, where he was declared dead on arrival.

A report to Yu’s office identified some of the injured as Jenny Sussing, Marilou Silus, Siera Mate, Jerry Dizon, Joven Padilla, Edfel Arevalo and Joel de Sulong. The majority of the injured sustained bruises and at least five were treated on the site, he said.

The incident would be formally reported to Mayor Joseph Estrada and the city government’s legal department would determine the liable party and whether charges would be filed for negligence, Yu added.

He noted that the five-inch thick platform that collapsed was made of concrete but had no steel bars for reinforcement.

Saturday’s clean-up activity was in line with International Coastal Cleanup Day and drew participants from the environment and public works departments, city government employees, and residents of Barangays 664 and 671 in Ermita.