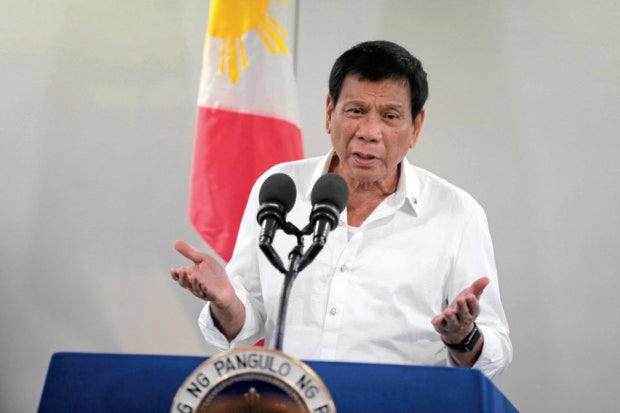 DAVAO CITY—President Duterte has lashed out at the media for allegedly choosing only the stories they want to report, and accused them of splicing videos to suit a particular angle, which often badly portrays his controversial war on drugs.

Duterte, who was the keynote speaker at a nationwide gathering of policewomen here on Friday, urged the police to continue with their jobs and ignore the criticisms because the media chooses only what it wants to report.

“Never mind their criticisms, there are many stories,” he told them. “They can say their own (stories), they can interpret their own… they may not believe us.”

He said the media “turn off their cameras” if a particular angle does not suit them, and hinted at corruption among their ranks.

“The truth is, it’s all about money. Sensationalism. You think it’s just us? Even the media,” he said, alluding to paid hacks in the profession.

He accused the press of reporting only “what they want” and of allegedly cutting him off midstream. “They’ll look for another story because they want another story,” Mr. Duterte said.

The President said this was also the reason why he refused to see convicted criminal Jaybee Sebastian because doing so would give the media another field day.

“Why would I talk to this guy? I would be portrayed as following orders to talk to him, so what would the media say?” President Duterte asked. “I’ll go there and what will come out is that the government and this guy are close friends. How foolish.”

He stressed that police were under instruction only to kill criminals if their lives were in danger. But his critics have continued to question the rising number of those killed during police operations.

“The duty of the police is to arrest a criminal, place him under custody and bring him in court,” Mr. Duterte said. “Those who fight it out, how do you bring them under custody? So, be quick on the draw.”

“If there’s warrant and he refuses to surrender and offers a violent resistance, then you just have to kill him,” the President said.

But he complained that news cameras were on “automatic shutdown” and only capture policemen in the act of killing a suspect.  “Just do it in the performance of your duty and I will back you up,” he told the assembled police officers.

He also reiterated he did not curse US President Barack Obama as widely reported, although a recording of the news conference showed him using cuss words as he answered the reporter’s questions.