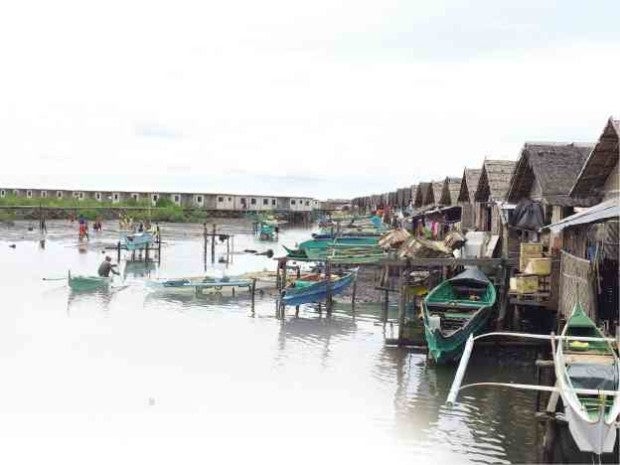 MEMBERS of the Badjao community displaced by the September 2013 siege of Zamboanga City by the Moro National Liberation Front are leaving this row of houses on stilts which the tribal people occupied as temporary shelters after the siege.
JULIE S. ALIPALA/INQUIRER MINDANAO

ZAMBOANGA CITY—Couple Nonie and Annang Jaji wept as they were handed the key to their new house on stilts at Valle Vista Subdivision in Kasanyangan village here on Wednesday.

They were among thousands of families displaced when the Moro National Liberation Front (MNLF) members went into rampage here from Sept. 9-28, 2013.

The couple had been staying at the Masepla Transitory Site in Mampang village with their seven children for more than three years before they were given a new house.

“This is happiness, we can start living normally like everyone and this place is nearer to where our children go to school,” Annang said in the Samah Badjao dialect, which her husband, Nonie, translated in Filipino.

The Jajis are among 487 families who were given new houses on stilts on Wednesday.

The house they got, like the other units, has one large room, a bathroom and a kitchen area made of wood and metal sheets.

Maria Socorro Rojas, the city social welfare officer, said over 4,000 families have yet to move into their new houses in different relocation sites here.

Mayor Maria Isabelle Salazar said only 32 percent of the more than 6,300 permanent housing units have so far been turned over to the city government for occupation.

Salazar said Wednesday’s turnover was the first for Samah and Badjao families and is considered to be the largest, in terms of the number of houses that were given.

The remaining 1,100 units are still to be distributed.

Both Salazar and engineer Al Kwarizmi Indanan, the director of the National Housing Authority here, admitted that there had been a delay in the turnover of the houses to recipient families.

Indanan said part of the delay was caused by the Local Water Utilities Administration, which has not completed building sanitation facilities in the new communities.

Another reason, he said, is the scarcity of supply for acacia mangium, the wood recommended for the houses.

Salazar is hoping that by 2017, all 4,000 families who are still homeless would already be able to move into their new houses.

This, she said, would lead to the closure of all transitory sites here.

“We still believe that this can be realized if we all sit down together and review the steps to be done to address the gaps right now in the rehabilitation (process),” Salazar said. Julie Alipala, Inquirer Mindanao