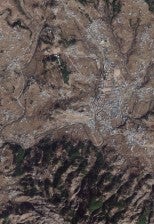 (1) In this January 2011 satellite image, Guli Badral, Pakistan and the surrounding villages and mountains are shown. In some of these Pakistani villages, surrounded by forests and glacial streams just 35 miles from where Osama bin Laden was killed, people become uneasy when asked what goes on up the mountains. When pressed, they say it's a secret training complex for Islamic militants and that the Pakistani army is aware of it even though the army denies that it exists. (AP Photo/GeoEye)

GULI BADRAL, Pakistan — In this Pakistani village surrounded by forests and glacial streams just 35 miles from where Osama bin Laden was killed, people become uneasy when asked what goes on up the mountain.

It’s where villagers avoid cutting pine trees for firewood. And where they know not to ask questions.

When pressed, they say it’s a secret training complex for Islamic militants and that the Pakistani army is aware of it — even though the army denies that it exists.

Accounts gathered by The Associated Press in the Ughi area of Mansehra district add to suspicion that Pakistan is playing a “double game” — that is, accepting U.S. aid to fight militants on the one hand but tolerating and in some cases even encouraging and harnessing the power of extremism on the other.

Three men who identified themselves as mujahedeen — militants — told the AP that the training complex is one of at least three in the region that between them house hundreds of recruits.

The mission, the three say, is aimed at taking recruits to Kashmir to fight Pakistan’s archenemy, India. But Kashmiri veterans have been known to join forces with al-Qaida and other terror groups, including those fighting the U.S. and its allies in Afghanistan and elsewhere.

The charges of Pakistani duplicity have gathered strength in the aftermath of the May 2 U.S. raid against bin Laden, who was hiding in the army town of Abbottabad and a short walk from a military academy. Pakistani officials have denied any collusion, but the country is now coming under renewed pressure to abandon its links to all Islamist militant networks.

In 2001, Pakistani President Gen. Pervez Musharraf said the country was severing its ties to jihadi groups amid intense American pressure following the Sept. 11 attacks. But few are convinced that has happened.

The Mansehra area, a roughly four-hour drive north of the capital, Islamabad, was known to have hosted state-backed militant groups in the 1990s. The region was considered ideal for such activities largely because it is so close to Kashmir — about 25 miles from Pakistani-administered Kashmir, and about 45 miles from the boundary of the Indian-controlled part of Kashmir. Both countries claim the territory in its entirety. 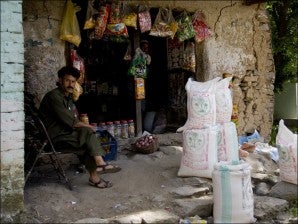 (2) In this May 9, 2011 photo, a Pakistani shopkeeper waits for customers in Guli Badral, Pakistan. In this Pakistani village, about 35 miles from where Osama bin Laden was killed, people like him won’t give a definite answer when asked about the goings on up in the mountains. (AP Photo/B.K.Bangash)

When contacted by the AP last week, the army denied there are any training camps or any facilities hidden away in the Mansehra area. “The allegations are baseless,” said spokesman Maj. Gen. Athar Abbas.

But in Guli Badral, locals say both extremists and men they presume to be soldiers are a familiar sight in the village square, where they shop for meat, flour and beans before getting back into pickup trucks for the two-hour trip along a rough track to the training camp.

The three militants who spoke to the AP about the camps did not give their names and asked that the names of their organizations not be published. They said there’s an army checkpoint on the road leading to one of the larger camps, near the village of Khatai. Militants and villagers alike gave the same advice to an AP team: Do not attempt to get any closer. It’s too dangerous.

At least one of the militants appeared motivated to speak out because of anger at the army, which he said was no longer so supportive as it once was. Before 2001, Kashmiri-focused militant groups had offices across the country where they could openly recruit and allegedly received considerable state funds.

The man said the army was “putting up hurdles” to the group’s work, including briefly arresting some of its members. He gave no details.

But it’s widely believed that the army has been unwilling to go a step further and dismantle militant training camps and crackdown on the groups using them.

The reason: Pakistan’s obsession with neighboring India as an existential threat. The two countries have fought three wars since 1947 — two over Kashmir — and remain in a state of semi-hostility.

India has a larger army, so Pakistan views militants as a cheap and motivated force when needed.

Pakistan’s alleged harboring of Afghan Taliban factions is also related to its hostility toward India. Pakistan fears being encircled by India, and wants an Afghan regime hostile to New Delhi when U.S. troops eventually withdraw.

“Pakistan has never changed its policy of using jihad as an instrument of its defense policy, even after 9-11,” said Arif Jamal, author of “Shadow War: The Untold Story of Jihad in Kashmir.”

“They do not want evidence of that getting out, but everybody knows what they are doing,” Jamal said.

Many of Pakistan’s former jihadi proxies have already turned against their former patrons in disgust at their collaboration with Washington after 9/11. Allied with al-Qaida and the Pakistani Taliban, they have carried out scores of suicide attacks within Pakistan.

One group, Lashkar-e-Taiba, is of growing concern to the West because it is believed to be seeking international links and modeling itself on al-Qaida. Foreigners have attended its camps. Lashkar operatives were trained in Pakistan before carrying out the 2008 terror attacks in the Indian city of Mumbai.

The three militants who spoke to the AP said all the bases in Mansehra were training recruits for jihad in Kashmir, not Afghanistan. An essential part of that process is religious indoctrination, especially a willingness to kill — and die — for Islam, said Jamal, who visited Mansehra camps about a decade ago.

The camp near the village of Khatai houses a mosque big enough for 2,500 worshippers as well as dormitories and classrooms, according to one militant, who said his job is to deliver supplies like boots and jackets to the facility. He said firing exercises take place deeper inside the forest, where the recruits stay in tents.

Recruits may enroll in a four-week course that covers basic military skills, or three-month stints with extensive instruction in guerrilla warfare, according to this militant. He said “chosen graduates” are then sent to the Pakistani-controlled part of Kashmir for more explosives training.

Not every graduate goes on to fight, he said.

“We don’t make just killing machines. Rather, we are trying to make them God-fearing men so that they don’t do anything wrong during jihad,” said the second militant.

The camp supplier said the training camps temporarily closed down in 2005 after an earthquake that killed 80,000 people brought international attention and aid groups to the region.

A signboard hammered into the ground in Guli Badral indicates that the American government once funded a health clinic here.

It’s a poor region, where men chop wood to fire up the kettle in ramshackle tea houses, and boys ride donkeys down the main street.

Like northern Pakistan as a whole, its people are conservative Muslims. The militants, many of whom come from elsewhere in Pakistan, are known universally as the mujahedeen or holy warriors, an honorable group in Islam.

Militants garnered public goodwill — and donations — for their work in helping those affected by the earthquake.

“The mujahedeen do their own work,” said school teacher Mohammad Sadiq. “They do not disturb anyone unless you cross into their territory.”