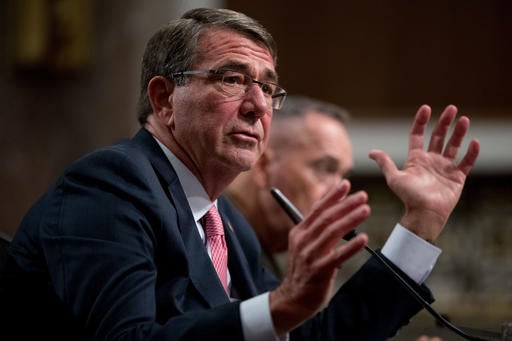 In this Sept. 22, 2016 file photo, Defense Secretary Ash Carter, accompanied by Joint Chiefs Chairman Gen. Joseph Dunford, testifies on Capitol Hill in Washington before the Senate Armed Services Committee hearing. The U.S. is sending 615 more troops to Iraq as the stage is set for an Iraqi-led battle to reclaim Mosul, the northern city that has been the Islamic State group’s main stronghold for more than two years. AP

The ministry cast a recent speech by U.S. Defense Secretary Ash Carter as a veiled threat to back a hypothetical attack on Russia by its allies in Europe with U.S. nuclear weapons. The angry statement reflects a growing degree of mistrust and tensions between Moscow and Washington after the collapse of a U.S.-Russian cease-fire deal in Syria.

On Monday, Carter accused Russia of “nuclear saber-rattling” and argued that even though the Cold War is long over, nuclear weapons are still needed to deter Russia and other potential aggressors from thinking they could get away with a nuclear attack.

“Across the Atlantic, we’re refreshing NATO’s nuclear playbook to better integrate conventional and nuclear deterrence, to ensure we plan and train like we’d fight, and to deter Russia from thinking it can benefit from nuclear use in a conflict with NATO,” Carter said. He emphasized that “obviously, we do not seek such a conflict to begin with, rather, we seek to prevent one.”

The Russian Foreign Ministry, however, interpreted Carter’s statement as a declared intention to lower the threshold for using nuclear weapons.

“Carter’s statement means that if Russia comes under attack from U.S. allies, the Americans will be ready to back it and threaten to use their nuclear weapons against us,” it said in a statement. “We would like to think that Washington understands the meaning of such statements and their possible consequences for international security and stability.”

The ministry noted that the current Russian military doctrine envisages the use of nuclear weapons to fend off an attack with conventional forces that threaten Russia’s very existence as a state. It accused Carter of trying to distort the document’s meaning in order to cast Moscow as a potential aggressor.

“Such flagrant misinterpretation of the official Russian document means that the secretary either has used a bad translation or is plotting a dangerous game,” it said.

As Russia-U.S. relations have sunk to the lowest levels since the Cold War times over the Ukrainian crisis, Moscow has angrily protested the deployment of NATO forces to the alliance’s members that border Russia and the development of NATO’s U.S.-led missile defense in Europe. Sharp differences over Syria have added to the bad blood.

“We note that the Pentagon chief’s belligerent rhetoric helps to a large extent clarify the real goals behind the ongoing modernization of the U.S. nuclear weapons,” the Russian Foreign Ministry said. “The strategy of pressuring Russia by force, which in the logic of its Pentagon ‘planners’ apparently means nuclear brinkmanship, will receive a more sophisticated and dangerous military-technical foundation.”

The ministry added that “it looks particularly cynical as all of it is being done by the administration of Barack Obama, the president who has declared the U.S. striving for nuclear disarmament and won the Nobel Peace Prize for that in advance.” TVJ

Read Next
Why is Chicago a murder capital? Clues from a bloody month
EDITORS' PICK
High inflation: Your P1 is now worth only 87 centavos
UK’s Boris Johnson will resign, BBC reports
Geek out at TOYCON 2022 powered by Smart Signature
House energy committee chair Arroyo bats for cheap electricity
High-risk pregnancy: Reducing your risk is in your hands
Unemployment rate up to 6% in May
MOST READ
Suspect in grisly killing of missing woman in Bulacan arrested
Hong Kong suspends flight bans as it eases COVID-19 rules
Kim Atienza’s daughter flaunts bikini body in response to critics of her ‘revealing photos’
Cop slain in Isabela ambush
Don't miss out on the latest news and information.