DOH tells pregnant women: Abstain from sex until after delivery to avoid Zika 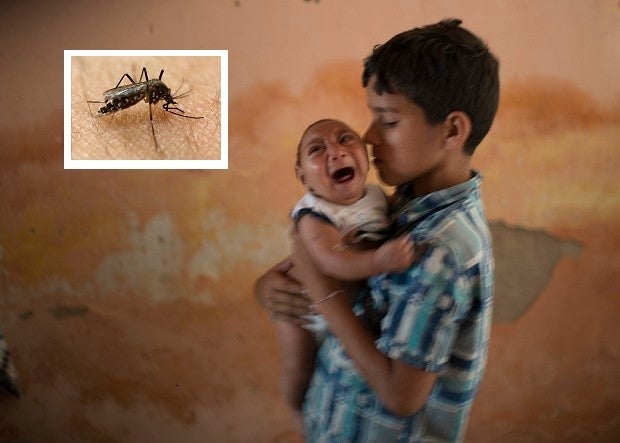 FILE – In this Dec. 23, 2015, file photo, 10-year-old Elison nurses his 2-month-old brother Jose Wesley, who was born with microcephaly, at their house in Poco Fundo, Pernambuco state, Brazil. The U.S. Centers for Disease Control and Prevention said Wednesday, Jan. 13, 2016, that it has found the strongest evidence so far of a possible link between a mosquito-borne virus and a surge of birth defects in Brazil. (AP Photo/Felipe Dana, File)

MANILA — Health authorities on Thursday urged pregnant women to abstain from sex until after they deliver their babies, or they can have their husbands use condoms to protect them from getting infected with Zika virus.

“We urge pregnant women or couples to talk about this and seek the advise of a doctor regarding the risks and protection available to them. In other countries, the recommendation is to abstain from sex until they deliver their babies or if abstinence is not possible, the use of condom as a barrier can be a protective way so that they don’t get the infection,” said the Department of Health spokesperson, Dr. Eric Tayag.

The DOH’s statement came after reports surfaced quoting the Diocese of Bacolod as questioning the inclusion of condoms in the anti-Zika virus packets being distributed by the government.

“We received news that these packets were distributed and that Sen. Rissa Hontiveros was part of the team that  distributed condoms. We’re verifying this,” said Tayag.

While he denied that the condoms were part of the anti-Zika prevention kits being distributed in the communities,  the heath official acknowledged that the inclusion of the contraceptives in the kits had a “rationale.”

“Our packets contain only bed nets and insect repellents. The condoms were not part of the kits. But there’s a rationale for that. Pregnant women can get Zika two ways–through mosquito bites and through sexual transmission,” noted Tayag.

“The husband might get Zika infection. Therefore if the pregnant women will still have sex with their partners, there is a risk of Zika being transmitted through sex. And this was reported in other countries,” he added.

Tayag’s views were echoed by Dr. Gundo Weiler of the World Health Organization.

“Zika has been detected in various countries in Western Pacific Region, which causes microcephaly,”  said Weiler, referring to a deformation marked by abnormally small brains and heads.

“We do not know all the conditions and how many infants will be affected. We believe it is important for pregnant women to take prevention against Zika. We recommend to those in areas affected by Zika to practice abstinence or safe sex to avoid Zika. From a public health point of view, the DOH recommendation  is an important measure to take at this time,” said Weiler.

At least 12 cases of Zika virus have been reported in the Philippines, including a 22-year-old pregnant woman in Cebu.  SFM