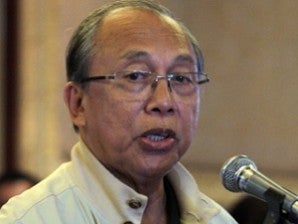 MANILA — The House minority bloc was cool to the idea of showing the alleged sex video of Senator Leila de Lima and her driver, even as House Speaker Pantaleon Alvarez said it would establish the two adults’ relationship that would ultimately link the former justice secretary to the alleged drug trade at the national penitentiary.

At a press conference on Wednesday, Minority Floor Leader Danilo Suarez said he would personally ask Justice Secretary Vitaliano Aguirre II “to think twice about showing it at a congressional hearing.”

Buhay partylist Rep. Lito Atienza, for his part, said that the congressional hearing on the supposed proliferation of illegal drugs inside the New Bilibid Prisons (NBP) should wrap up because there was enough proof that show de Lima had benefited from the drug trade.

“I think we all share the same conviction. That video should not be shown,” Atienza said.

But aside from questioning the relevance of the alleged sex video to the congressional investigation, the lawmakers also objected to showing it because, to them, it was not a pleasant sight.

When asked if the Duterte administration’s objective of blaming De Lima for the proliferation of illegal drugs at the NBP was actually a symptom of its misogynist and sexist bent, Suarez disagreed.

According to Suarez, the unearthing of De Lima’s “drug connections” is only part of efforts to surface the truth about the country’s serious drug problem.

Kabayan partylist Rep. Harry Roque considered it incidental that a female politician has become the center of the controversy.

But in the course of the discussion, the lawmakers also mocked and laughed at the supposed De Lima sex video.

“If it were pleasing to the eyes, okay. If not, then don’t show it,” Suarez said in Filipino.

Atienza added he has seen the video. “You’re lucky if you haven’t seen it,” he said as the room burst into laughter.

“It’s scary. President Duterte’s reaction is right. You will lose your appetite,” Atienza said. “The performers were ugly.”

Suarez said he saw the video only last Tuesday. “The partner was good,” he said.

A young female reporter pursued the question: “On phallic domination, do we really need to show a sex video of Senator De Lima who is a woman just to show her relationship with her driver? Isn’t that a form of slut shaming?”

The room went silent, before Suarez said: “Meron bang ganun (Is there such a thing)?”

De Lima’s nemesis, President Duterte himself, brought up the story that the senator had a sex video with Dayan.

Later on, the Bilibid convicts who testified for the Department of Justice insinuated that De Lima had an affair with another convict, Jaybee Sebastian, who was one of the alleged drug lords at the NBP.

The congressional hearing is set to resume on Oct. 5, and Aguirre had declared he would show the De Lima sex video.

House committee on justice chairman Reynaldo Umali said that the video would be shown only if it was “germane” to the investigation. He said he would make Aguirre explain first why he thought the showing of the video would further prove their allegations against De Lima.  SFM