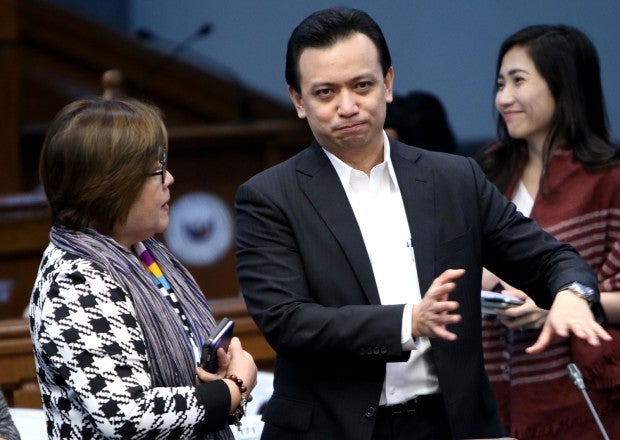 Committeee Chair Leila De Lima and Senator Antonio Trillanes during the Senate probe on the alleged extrajudicial killings at the Senate in Pasay City. INQUIRER PHOTO / RICHARD A. REYES

Sen. Antonio “Sonny” Trillanes IV on Tuesday said the administration was exploring all “underhanded tactics” to silence the critics of President Rodrigo Duterte and his bloody war on drugs, like what Sen. Leila de Lima was facing.

In an INQ&A interview, Trillanes said he was bracing for the worst of attacks from Duterte’s camp since the campaign period, but noted that threats would not stop him from exposing what needed to be exposed.

“I am totally aware that they have sets of lawyers trying to find anything that can put us in jail… Lahat ng mga underhanded tactics, it’s on the table. All options are on the table para lang makuha nila ‘yung end nila,” Trillanes said.

“When I joined this expose, I assumed na bibirahin na ako,” said Trillanes, who said before the elections that a Duterte presidency would mean a “disaster” for the Philippines.

After his privilege speech on Monday, Trillanes moved that the Senate blue ribbon committee investigate Duterte over his alleged direct involvement to more than a thousand of summary killings in his hometown when he was still Davao City mayor.

The senator tagged Duterte as a “mass murderer” President as he stood by the credibility of confessed hitman Edgar Matobato, who claimed to be a member of the infamous Davao Death Squad. During the campaign period, it was also Trillanes who revealed Duterte’s bank account which saw transactions of more than P1-billion in a nine-year period.

Trillanes also lamented that the congressional inquiry into the proliferation of drugs in the national penitentiary was being used by Duterte’s allies to coerce De Lima, who is being accused by the President and his men of coddling drug lords.

De Lima, who has become the President’s staunchest critic, initiated the Senate inquiry into the spate of suspected extrajudicial killings in the country amid the administration’s relentless antidrug campaign.

Trillanes said “it doesn’t make sense” that drug lords and convicts were being used to testify against De Lima by a government who is waging a war against drugs and criminality.

(Why did that happen then they were given immunity? I thought we’re at war against drugs but now, they’re partners in pursuit of an alleged protector.)

“Kung ang kanilang objective ay magkaroon ng (If their objective is to have a) chilling effect, they were able to achieve it at least for some,” Trillanes added. TVJ