Duterte apologizes to 3 in drug matrix 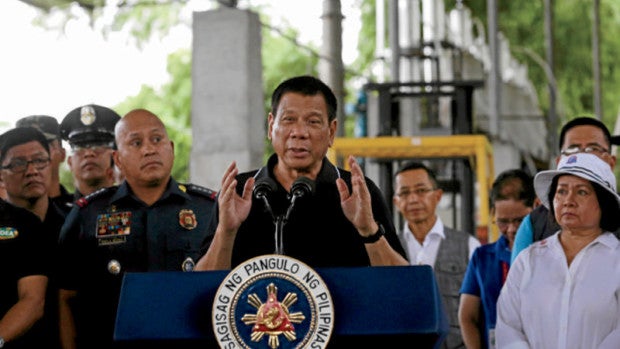 This apology, a first from President Duterte since he assumed office, was directed at Pangasinan Rep. Amado Espino Jr., Board Member Raul Sison and former provincial administrator Rafael Baraan whom he accused of protecting the illegal drug trade.

“I’ve been looking at the list and there’s a gap that cannot be explained. I don’t know why (Espino’s) name is there. Is this a result of intrigues? Rumors?” Mr. Duterte said in a press conference on Tuesday after he inspected a laboratory of “shabu” (methamphetamine hydrochloride) at the foot of Mt. Arayat in Barangay Lacquios here.

Mr. Duterte said he knew that Espino, a former three-term Pangasinan governor, had been suspended by the Sandiganbayan on a graft case in connection with the illegal black sand mining in Lingayen, capital town of Pangasinan.

“But I could not see the connection between black sand mining and illegal drugs,” he said. “Somewhat we were negligent. I am apologizing publicly to them. I am very sorry.”

“Hindi ako fried chicken kagaya ng iba (I am not a proud man like some people),” Mr. Duterte said, adding that he was man enough to own to a mistake.

But when asked if the vetting of suspected drug protectors had gone wrong, he said: “Nothing went wrong. It is in the focusing, there were lapses.”

He said the supposed drug matrix naming Espino and the others as drug protectors was “validated four times.”

“I can be foulmouthed but when I make a mistake, I can say I am very sorry,” Mr. Duterte said in Filipino.

When reached from Pangasinan on Tuesday, Espino said: “The truth has finally come out and I thank the President very much.”

“I am humbled by the pronouncement of the President clearing me of involvement in the alleged drug matrix,” he said.

“I kept my silence for the past three weeks as I know beyond reasonable doubt that I am not guilty of the allegation. More so, when I had the opportunity [on] Aug. 30 for a meeting with the President, he promised me to have the matrix revalidated by the proper authorities,” Espino said.

He described Mr. Duterte as “a true leader and a gentleman … for the courageous and bold statement of apology,” as well as for clearing him, Baraan and Sison.

He said the shabu laboratory in Arayat served as proof that the audacity of criminals required the declaration of a state of lawlessness in the country.

Without regard for law, he said, the main Chinese suspect, identified as Sunday Chua, set up a laboratory that could produce 400 kilograms of shabu daily. It was abandoned shortly before the May 2016 elections.

More facilities like these would be busted, he said, adding, “I shall not back out. If I do not act, Filipinos will be in a pitiful situation.”

Expressing anger, Mr. Duterte said had he met Chua, he would have “poured muriatic acid all over him.”

He said the laboratory was connected to the network of drug dealers jailed in New Bilibid Prison (NBP).

An NBP convict, who hails from Arayat town, was believed to have recommended the laboratory site to Chua’s group.

The President ordered the Philippine Drug Enforcement Agency to sequester the land and turn it over to the provincial and local governments for use as a rehabilitation center. With a report from Gabriel Cardinoza, Inquirer Northern Luzon