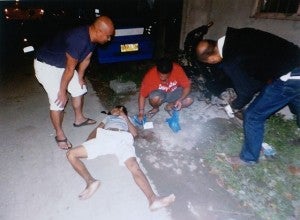 CEBU CITY, Philippines — A suspected drug dealer was gunned down in an aborted drug bust by a special police task force at the Prince Court Hotel in Barangay Mabolo, Cebu City, at past 8 p.m Monday.

Sanchez reportedly noticed that he was transacting with a police poseur buyer, prompting him to engage the operatives from the Regional Special Operations Group-Regional Anti-Illegal Drug Special Operations Task Force, in a shootout. The suspect sustained gunshot wounds.

He was rushed to the Mandaue City Hospital but failed to make it there alive. Recovered from Sanchez were three plastic packs believed to contain shabu (methamphetamine hydrochloride), a .22-revolver and P3,000 in cash.  SFM/rga