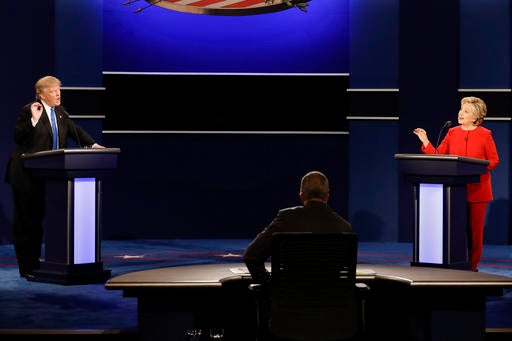 HEMPSTEAD, United States—Hillary Clinton and Donald Trump strode out cloaked in icy politeness. Yet within minutes their debate degenerated into bickering, insults and diatribes — a gladiatorial contest of modern times.

It was a 90-minute battle of endurance between two of the most famous people in America: Clinton, cool, calm and collected, almost serene as she smiled through the insults — and landed jabs of her own — while Trump gripped his podium, insisting he alone had the temperament to be commander-in-chief.

The Democrat Clinton projected steady experience. She proved her worth as the mistress of policy minutiae, pitching herself as the voice of reason, the former secretary of state who understands the world.

READ: Debate Takeaways: Clinton gets under Trump’s skin in debate

Trump the Republican played the populist bruiser, wielding the cutting insult and pitching to frustrated voters in the swing-state rust-belt, such as Ohio and Pennsylvania, fed up with politicians and wanting change.

Both elicited laughter and cheers: Clinton for lofty comebacks. Trump for his quick digs but also for his outlandish claims.

Yet if they were evenly matched at first, Trump appeared to get more irritated and riled, at one point rolling his eyes, trashing her stamina and emitting an frustrated “ugh.”

It began with an ironic sartorial tribute from each to the other’s political colors. Clinton strode out in a Republican red pant suit and Trump in a Democratic blue tie.

“Donald, it’s good to be with you,” said Clinton as the cameras panned to the weakest of smiles in response from the Manhattan billionaire.

Yet in minutes Clinton took the first thinly veiled swipe, jabbing her opponent over taking a handout from his wealthy father before they came to blows over the economy, race, foreign policy and temperament.

It was sometimes less two presidential candidates slogging it out for the most powerful elected office on the planet and more toddlers bickering in the nursery.

“Donald thinks that climate change is a hoax perpetrated by the Chinese,” said Clinton. “I do not, I do not,” he protested.

“Donald, I know you live in your own reality,” swiped Clinton.

“Secretary — you have no plan,” hectored Trump.

As moderator, NBC Nightly News anchor Lester Holt was all but cut out, unable to get a word in edgeways. “We need to move on,” he said as Trump hectored into the microphone about the nuclear threat.

If Trump was patronizing, Clinton was disdainful. Despite pleas from the organizers for no cheering, booing or clapping, the audience was unable to contain themselves.

Clinton sought to present her opponent as unfit for office, a man who insulted Muslims and promised disastrous economic policies.

“I think my strongest asset, maybe by far is my temperament,” said Trump to laughter.

“She doesn’t have the stamina,” blasted Trump as Clinton leaned nonchalantly on her podium.

“Well as soon as he travels to 112 countries and negotiates a peace deal… or even spends 11 hours testifying in front of a Congressional committee he can talk to me about stamina,” she responded to cheers.

Trump furiously disputed that he had ever supported the 2003 US-led invasion of Iraq, leaning into the microphone and launching a lengthy critique of the media for suggesting it was so.

And he hit back as Clinton charged he launched his political career by supporting a “racist lie” over President Barack Obama’s US citizenship.

“When you tried to act holier than thou, it really doesn’t work,” jibed Trump. “She spent hundreds of millions of dollars on negative ads of me,” he complained. “It’s not nice, I don’t deserve that.”

There were lighter moments, too, such as Trump speculating that the hack of Democratic Party emails could have been by Russia, or China or “someone sitting on their bed that weighs 400 pounds.”

But it was not his most brash performance. He stuck throughout to calling his opponent “secretary Clinton” — avoiding his “Crooked Hillary” epithet from the campaign.

And it ended with a question over whether each would accept the outcome of the election. “If she wins, I will absolutely support her,” said Trump — the final words of the debate.