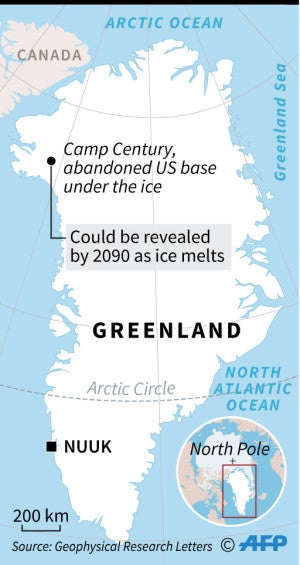 COPENHAGEN, Denmark — A snow-covered former US army base in Greenland — dubbed “a city under ice” — could leak pollutants into the environment as the climate changes, raising difficult questions over who is responsible for a clean-up.

In 1959, US army engineers began constructing a futuristic project in northwestern Greenland that might as well have been lifted from a Cold War spy movie.

A network of tunnels under the snow contained everything from research facilities to a hospital, a cinema and a church — all powered by a small, portable nuclear reactor.

The pollutants left behind include PCBs used in building supplies, tanks of raw sewage and low-level radioactive coolant used in the nuclear reactor that once stood there.

“When the waste was deposited there nobody thought it would get out again,” William Colgan, an assistant professor in the Lassonde School of Engineering at York University in Canada, told AFP.

But a study led by Colgan, published in August in the journal Geophysical Research Letters, found that higher temperatures could eventually result in toxic waste from the base being released into the environment.

“Neither the US or Denmark has done anything wrong per se, but the world has changed,” he said.

Accommodating up to 200 soldiers, “Camp Century” was officially built to provide a laboratory for Arctic research projects, but it was also home to a secret US effort to deploy nuclear missiles.

Code-named “Project Iceworm”, that part of the operation was never mentioned in the treaty between the US and Denmark, once the colonial master of Greenland, a territory that is now largely self-governing.

But the spectacular project — which even included a test railway under the snow — was never fully realized.

Three years later scientists found that the glacier was shifting much faster than previously thought, threatening to crush the tunnels, and the base was abandoned in 1967.

Assuming the site would remain frozen in perpetuity, the US army removed the nuclear reactor but allowed waste — equivalent to the mass of 30 Airbus A320 airplanes — to be entombed under the snow.

Half a century later that decision is being questioned as temperatures in the Arctic rise at a higher pace than in the rest of the world.

By 2090, the amount of ice melting may no longer be offset by snowfall, meaning the toxic chemicals could start leaking into the environment, the study found.

Before then, fissures in the snow could lead to melt water seeping into the crushed tunnels, currently located around 35 meters (115 feet) below the surface.

Since excavating the site would be hugely expensive, Colgan believes a clean-up operation would have to wait until the camp has been uncovered by the melting ice.

Greenland Foreign Minister Vittus Qujaukitsoq said the study’s findings were “worrying” and that his government was working to ensure that it was established who would be responsible for cleaning up the site.

The former government in the capital Nuuk had in 2014 requested a report from Copenhagen on possible contamination from Camp Century without receiving “any assessment of the extent or character of the waste” described in the study, he said in a statement.

Danish Foreign Minister Kristian Jensen said in a statement that his government would “now look closer at these aspects together with the relevant expertise… in close dialogue with Greenland.”

After Colgan’s report was published, the US Department of Defense released a statement saying it “recognizes the reality of climate change and the risks it poses. The Department is aware of the report but has not evaluated it.”

The US would “continue to work with Danish authorities and Greenland home rule authorities to address mutual security concerns,” it said.

The logistics of decontaminating the site may not be the greater challenge, Colgan said, noting that the US and Denmark have previously cleaned up a site where a B-52 bomber carrying four hydrogen bombs crashed in 1968 near the Thule air base, around 240 kilometers (150 miles) from Camp Century.

“The environmental hazard is relatively small and far away and there are only a few native towns close by,” he said.

Establishing which country is responsible for doing it would be trickier, but could help set a precedent for other conflicts arising from climate change, he predicted.

“It hasn’t really been done before, there’s no blueprint. It’s not as easy as the engineering aspect of the challenge,” he said.

Sara Olsvig, a Greenland opposition lawmaker who raised the issue in Nuuk’s parliament, admitted that “a lot of things” in the decades-old agreements between Copenhagen and Washington on several different military installations were “unclear”.

“There’s not so much that Greenland can do in regards to the Danish-US relationship and what they will do concerning the final responsibility,” she said.

In the end, the two countries would probably take joint responsibility for cleaning up the base, said Kristian Hvidtfelt Nielsen, an associate professor of science history at Aarhus University who has studied the Camp Century project.

“From a moral standpoint, I think Denmark and the US have a common responsibility to clean up. The Americans put the base there and the Danes gave them permission to do it,” he said. CBB