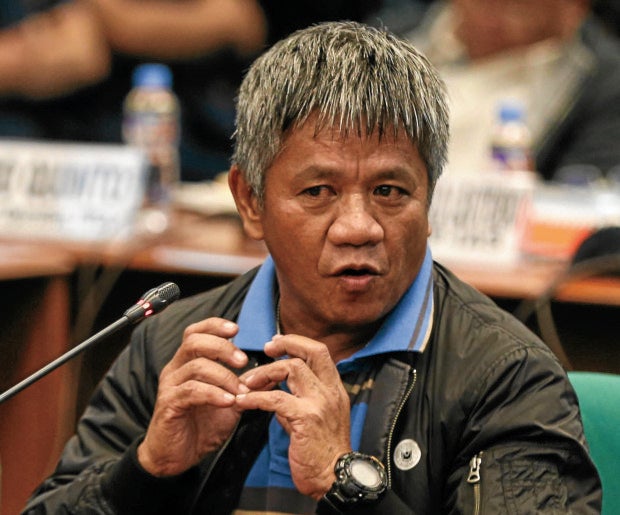 Testifying at the committee’s inquiry into alleged extrajudicial killings in the government’s war on drugs, Matobato disclosed that President Duterte had ordered the killing of about 1,000 crime suspects and political opponents while serving as mayor of Davao City.

A longtime resident of Kilometer 14 in Tagbaobo, a village in Peñaplata district, Matobato, according to local residents, appeared meek during his televised testimony, in sharp contrast to the image of a ruffian that he had when he lived among them.

“Our neighbors feared him. He always carried a gun or a rifle,” said resident Nena Capa, 69, mother of Matobato’s first common-law wife with whom he has four children.

According to his neighbors, Matobato made himself scarce in the community in 2008 after leaving Capa’s daughter and their children for another woman.

Matobato, who told the Senate that he cleared only Grade 1 in school and that he worked as a militiaman before becoming one of Mr. Duterte’s bodyguards and eventually a hit man for the then mayor’s alleged liquidation squad—the so-called Davao Death Squad—dragged his community into the inquiry into the drug killings when he claimed that he was one of the men who killed alleged international terrorist Sali Makdum on Mr. Duterte’s orders.

“We chopped him into pieces and dumped his body, which we weighted with hollow blocks, into waters off Samal,” Matobato told the Senate investigators.

But according to local residents, Makdum was Matobato’s neighbor. They described Makdum as a good man, one who could never have been a mass murderer.

“He was a kind person. On several occasions, Eric (Makdum’s nickname) even drank with some neighbors. He wasn’t violent,” said Melchor Marquez, father of Makdum’s Filipino common-law wife.

“It came as a shock to us when we heard people asking neighbors about Makdum and identifying him as a terrorist. We could not believe it,” Marquez, 64, and a farmer, said.

He said Makdum, a Saudi Arabian, met his daughter, Mirasol, sometime before 2000 when she was working in Davao City. They have a daughter, who is now in her late teens.

Makdum, described in news reports as a Turk or a Pakistani, was into several businesses, including gold trading and real estate, together with Mirasol.

It was during his visits to Tagbaobo that Makdum met and was befriended by Matobato, as their common-law wives were first-degree cousins, Marquez said.

On the day he disappeared, Makdum met with Matobato at an eatery in downtown Peñaplata to discuss a real estate deal.

Witnesses pointed to Matobato as the man who was with Makdum when several men seized him, forced him into a van and sped away.

“I cannot forget my daughter’s distraught voice when she called me up using a cell phone, telling me Eric had failed to return home,” Marquez said. “As far as I can recall, it was Nov. 9, 2000.”

Marquez said that according to Mirasol, unidentified men called up, demanding P3 million in exchange for Makdum’s freedom.

He said Mirasol managed to talk the men into reducing the ransom to P100,000, which she handed to an unidentified person inside Gaisano Mall in Davao City.

But Makdum was not released even after payment of the ransom, Marquez said.

He said Mirasol did not see Matobato during the payoff but he and his daughter suspected that Matobato was involved in Makdum’s kidnapping because of a phone conversation between Makdum and Mirasol.

“She asked Eric who was with him at the time and Eric said, ‘Edgar,’” Marquez said.

He said he and his daughter brought charges against Matobato. They also sought help from the then Presidential Anti-Organized Crime Task Force and the National Bureau of Investigation, he said.

But the case did not prosper, he said, because of the lack of witnesses who could attest to Matobato’s involvement in the kidnapping of Makdum.

Marquez said his family began to harbor ill feelings toward Matobato and, to some extent, the family of Matobato’s common-law wife.

It was around this time, he said, that Matobato became notorious in the community. He said Matobato beat up or threatened with a gun many neighbors for the slightest reason.

“He fired his gun whenever he was drunk. He mauled me once,” Marquez said.

Community leader Redin Makilid said many residents had reported Matobato’s violent tendencies and his penchant for bragging about his connections with people in the government.

Local residents said Matobato’s testimony in the Senate had put their community in bad light.

“We’re shocked by his allegations, especially because he had reopened old wounds,” Marquez said.

He said that while he and his daughter wanted justice for Makdum, they were now tired and just wanted to be left alone.

It’s now up to the government to prosecute Matobato for the murder of Makdum, he said.

“If the parents or other family members (of Makdum) will ask for our help, we will wholeheartedly oblige,” he said.

“Of course, I would like to see him pay for his crimes,” he said.

Marquez said Matobato’s testimony in the Senate had broken the serenity of Tagbaobo, with many “annoyingly curious” people coming to ask about the hit man and Makdum.

For the Capa family, Matobato’s testimony in the Senate had brought them “shame.”

“Since he left my daughter and abandoned my grandchildren in 2008, we had severed whatever ties we had with him. We don’t want to get involved with him or his alleged crimes,” Capa said.

Capa runs a variety store, located in front of her house, to augment the family income, as all of Matobato’s children are under her care.

The Marquezes and the Capas live not far apart in a community with rolling hills and coconut plantations about 45 minutes by motorcycle from the city center.

Capa said even Matobato’s children were angry with him for “bringing shame” to the family.

“We even thought he was already dead, since he hadn’t given financial care to his family for quite a long time,” she said, adding that Matobato’s eldest daughter, who is 22, is now a mother.

“That’s why we were very surprised when we saw him on TV talking like a madman,” she said.

Capa said she knew little about her “former son-in-law.” She said she did not know what his job was or whether he really was a hit man for the Davao liquidation squad.

“When he was still living with my daughter, he would leave the house early in the morning and return home late at night. He had a gun,” Capa said, adding that Matobato physically abused and threatened her daughter.

She said she hoped the controversy involving Matobato would be put to rest “so we could move on with our lives.”

“I also hope this will no longer strain our relationship as a family, because those involved are outsiders, while Melchor and I are full-blood relatives,” she said. TVJ