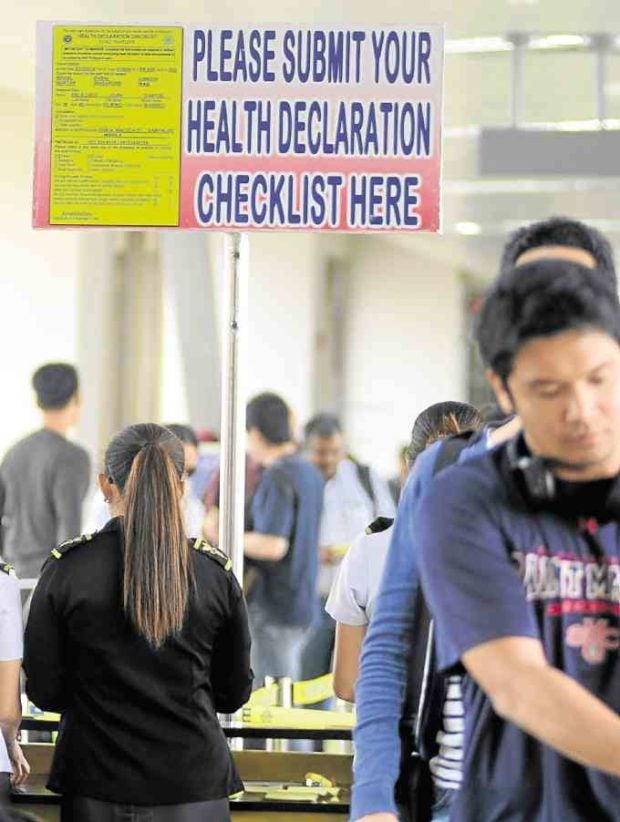 THE SPREAD of Zika virus prompts authorities to install this notice at Ninoy Aquino International Airport and other airports in the country. INQUIRER PHOTO

ILOILO CITY—The Department of Health (DOH) is not recommending a ban on travel to areas where there are confirmed cases of Zika infection, even as six more cases have been reported.

Assistant Health Secretary Enrique Tayag said in a press conference here on Wednesday that there was no need to restrict travel because, unlike in other countries, the infection is confined to the areas where the cases had been reported.

Tayag said the infection is not yet widespread and there has been no reported case of microcephaly and other birth defects on babies caused by the Zika virus.

Transmission has also been mosquito-borne and there was no reported case of infection through sexual transmission.

The DOH in Western Visayas earlier issued a statement for pregnant women and those planning to get pregnant to “consider postponing travel to Iloilo.”

But Tayag clarified that what is important is for pregnant women to take precautionary measures against mosquito bites.

Four of the new cases were reported in Iloilo and one each in Cebu and Laguna.

In Cebu, the DOH is monitoring a woman who is 19 weeks pregnant after she was found positive of the Zika virus.

Dr. Jaime Bernadas, DOH director for Central Visayas, said the woman could stay in her house and did not have to be isolated.

He declined to provide details, saying the DOH main office in Manila would issue a statement.

But a source said the woman was admitted in a private hospital in Cebu from Sept. 9 to 12.

A team from the regional DOH office continued to investigate.

Bernadas said this was not the first Zika case in Cebu City.

The first case was reported in 2012 involving a female foreigner who didn’t know she had Zika virus until she returned to her country.

Bernadas said those who had shown symptoms of the virus should go to the nearest health centers or hospital to be checked.

“Everyone is vulnerable but pregnant women should be extra careful since it can affect the child,” he said.

Like dengue fever, Zika is a mosquito-borne infection caused by the Aedes aegypti mosquito.

It is transmitted through mosquito bites, sexual contact, blood transfusion or by a pregnant woman to her fetus.

Infection during pregnancy can lead to serious birth defects. The baby may develop abnormality in the size of the head due to incomplete brain development called microcephaly.