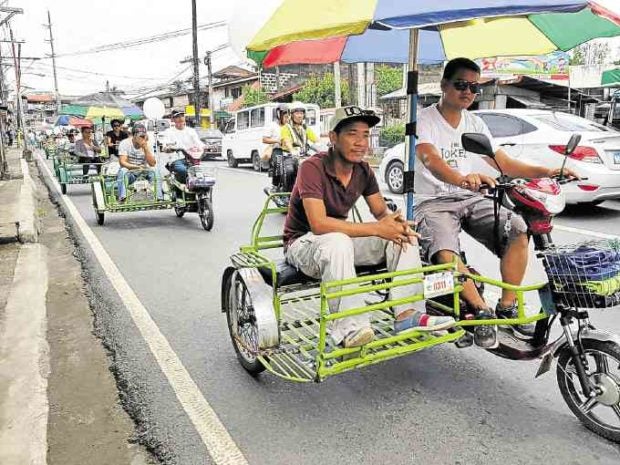 Aside from the beach umbrellas meant to shield passengers from the sun, the e-bike drivers tied white balloons to their bikes as they took their slain colleague to his final resting place on Tuesday.

To his fellow drivers, Del Mundo, 43, was a victim of the government’s bloody war on illegal drugs.

A police report said Del Mundo, on Sept. 10, was preparing to take passengers from the local tricycle drivers’ association (Toda) station in Barangay Putho-Tuntungin when two men on a motorcycle shot him several times.

Fellow drivers took him to a hospital, but Del Mundo died from his wounds the next day.

The attack was caught on a security camera of the village, but police have yet to identify any suspect.

“He was a good person, otherwise there wouldn’t be that many in the funeral,” said Bernardito Regis, the local Toda president.

He said more than 100 e-bike drivers left their route, off the campus of the University of the Philippines Los Baños on Tuesday afternoon to attend Del Mundo’s funeral.

He said Del Mundo was arrested for a drug-related offense two years ago but was let out on bail.

“He was a changed man,” Regis said.

He said he did not know how Del Mundo, in 2015, was able to secure a police clearance, a requirement for applicants to the local tricycle drivers’ group. He said Del Mundo was then looking for a decent job.

Regis said Del Mundo was among those who recently “surrendered” to the police’s “Oplan Tokhang,” a campaign to encourage illegal drug users and pushers to turn themselves in to authorities.

Regis said he had no idea who wanted Del Mundo dead.