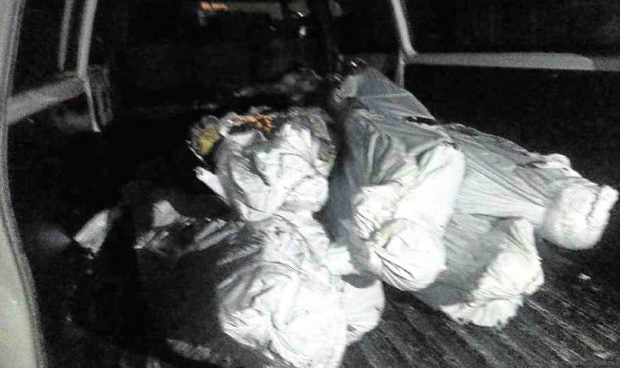 WRAPPED in PVC sheets, the bodies of victims of extrajudicial killings are brought to the Manila North Cemetery for burial. Contributed photo

Months after floating in a pool of formaldehyde at a funeral home, 11 victims of extrajudicial killings (EJK) in Manila were finally given a pauper’s burial on Wednesday night at a public cemetery.

The 11 males were victims of cardboard justice—their bodies found separately on the streets of Manila with pieces of cardboard containing messages identifying them as drug pushers.

On Wednesday morning, the media received a tip that there would be a mass burial of victims of extrajudicial killings at the Manila North Cemetery at 3 p.m. Although the information was denied by cemetery officials, reporters and photographers waited in the area until 7 p.m.

The Inquirer later learned that the interment pushed through at 9 p.m. after the media left.

A source said that the bodies which were wrapped like mummies in white PVC sheets arrived at the cemetery in a van. There was no priest to bless the dead and except for cemetery personnel, no one else was present as all the dead remained unidentified, unclaimed and unmourned.

“No one ever came to identify them,” another source said, adding that those who were buried were among the early casualties since President Duterte kicked off his war on drugs on July 1.

The Manila Police District (MPD) reported that as of

Aug. 28, they had recorded 39 victims of extrajudicial killings in the city.

According to a source, the bodies had been at the funeral home for more than 60 days. Based on the guidelines provided by the city government, the dead may be buried after 60 days should no one come forward to claim them.

In near darkness, cemetery workers buried the dead in apartment-type niches, two bodies each to a niche.

It took them about an hour to finish the job that included cementing the niches closed and placing markings, in case a relative or family member comes forward to identify them.

According to a source, the burial was an attempt to give these victims last respects and at the same time, cut the losses of the funeral home which processed them.

Taking care of the corpses for two months had cost the funeral home owner around  P200,000. The 11 bodies was just half of the number that it needed to dispose of, the source added.

The rest of the unclaimed bodies remain floating in the rectangular pool filled with formaldehyde—but mixed with chamomile to hide the stench of death.

The pool was last used five years ago but the spike in the number of deaths since July has prompted the funeral parlor to bring it back into use, filling it with drums of fomaldehyde.

Those who think their loved ones may be among the 11 unidentified men can contact the cemetery.

They can also go to the MPD’s homicide unit which has recorded the victims’ identifying characteristics such as tattoos, birthmarks, moles and clothes.