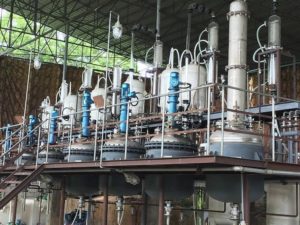 Police busted a big shabu laboratory at the foothills of Mt. Arayat in Barangay Lacquios in Arayat town in Pampanga, the second to be discovered since Sept. 7 when an underground shabu laboratory was found in nearby Magalang town. CONTRIBUTED PHOTO

CITY OF SAN FERNANDO —  Seven industrial distillators, a reaction mixer and a combustion tower were found at a shabu laboratory which was shut down on Thursday (Sept. 22) by the Pampanga police, Chief Supt. Aaron Aquino, Central Luzon police director, said.

The structure in Barangay Lacquios at the foothills of Mt. Arayat was discovered by government employees conducting fire safety and sanitary inspections.

Capable of producing 100 kilograms of shabu (methamphetamine hydrochloride), the clandestine laboratory was operated in what was registered as a piggery and corn crusher inside a building surrounded by trees and shrubs near the Cong Dadong Dam, an Arayat government report given to the Philippine Drug Enforcement Agency stated.

The police inventory list also included an industrial chiller and a generator.

Lacquios is about five kilometers from Barangay Balitucan in Magalang town where PDEA and the police discovered a piggery farm concealing an underground shabu laboratory on Sept. 7.  SFM