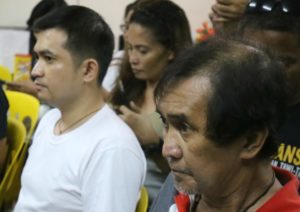 Cerilo Alcala (right) and son, Sajid Alcala (in white shirt), both related to former agriculture secretary Proceso Alcala, appear at a police station, on Aug. 14, 2016, to respond to allegations on their involvement in drugs. (FILE PHOTO BY DELFIN T. MALLARI/ INQUIRER SOUTHERN LUZON)

LUCENA CITY, Quezon — Police on Thursday arrested the estranged wife of a member of the Alcala clan for her alleged involvement in the illegal drug trade in Quezon province.

Recovered from Alcala’s house were six sachets of “shabu” (methamphetamine hydrochloride) worth P1,500; a sachet containing suspected marijuana seeds; and magazines and bullets for a .45 cal. pistol.

The police identified Arlene Alcala as the estranged wife of Sajid Alcala.

On Aug. 14, Sajid and his father, Cerilo “Athel” Alcala, the top two suspects on the drug watch list of the Lucena City police, surrendered to authorities.

Family members said Cerilo and Sajid decided to present themselves to authorities because their alleged involvement in illegal drugs had dragged the entire family into a scandal.

After their surrender last month, Cerilo, who denied he was into illegal drug trading, was placed under hospital arrest due to two bench warrants on drug-related cases issued by local judges.

Sajid had no pending arrest warrant and was allowed to go home after his surrender. His father was also freed after posting bail.

On Sept. 11, Cerilo’s wife, Maria Fe Abutin Alcala, and daughter, Toni Ann, also classified by the police as high value targets, were arrested in a drug bust in Tayabas City.

President Duterte, in his recent speeches, cited members of the Alcala family as among those suspected of involvement in illegal drugs.  SFM

Read Next
Life in the countryside ‘freer’ than open work for NDF — Tiamzons
EDITORS' PICK
As vaccine injection rate rises in PH, questions linger on how long it would take to reach herd immunity
Re-imagining EdTech and the classroom in a post-pandemic era
A Spanish Celebracion with Crimson Mactan’s ‘Enye at Home’
CopperMask Philippines shows support for Miss Universe Philippines 2020 Rabiya Mateo
Palace doesn’t see tension in WPS, only Duterte haters incite it
Retired military, police execs call for unity vs China aggression
MOST READ
Mexico wins Miss Universe title but Myanmar steals show
‘Check your facts:’ Trillanes disputes Enrile claims on 2012 back-channel talks with China
Retired military, police execs call for unity vs China aggression
Pangilinan on China’s threat if PH digs oil in WPS: Why should we be scared?
Don't miss out on the latest news and information.