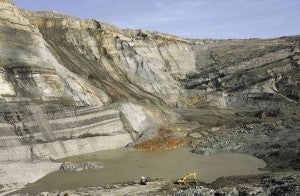 LIGHTNING STRIKES TWICE File photo shows the Semirara open-pit coal mine where five workers went missing and were never found after a landslide in February 2013. A similar episode happened in July 2015, at the same site in the DMCI-owned Semirara Mining and Power Corp in Antique. RAFFY LERMA

MANILA — Environment Secretary Regina Lopez said on Wednesday that a regional director of the Environmental Management  Bureau (EMB) has been placed under investigation for showing prematurely the results of a mining audit to Semirara Mining and Power Corp. (SMPC).

Lopez told reporters the results of the audit on Semirara’s coal mine on an island of the same name off Aklan.

“I got angry, they gave the report to the mining company without going to the EMB head and the head of the audit team,” she said. “I am shocked, and that’s an understatement, that the regional director of EMB sent (the) report (to SMPC).”

In a disclosure to the Philippine Stock Exchange filed on Tuesday, SMPC quoted two reports — including the mining audit report that said the mine was found to be in “full compliance to environmental laws.”

“That’s so out of protocol and leaves to serious doubt the validity of that report,” Lopez said. “That report is absolutely premature. And that RD is in hot water.”

She was referring to Jonathan P. Bulos, regional director of EMB Region 6 , who supplied SMPC president Victor M. Consunji the copy of the two reports.

The DENR was supposed to disclose results of the audit of all mining operations in the Philippines on Thursday (Sept. 22).  The report was already delayed by one week from the previously announced date.

However, Lopez said this was again moved to Monday, September 26, since she needed to fly to New York in time for the United Nations General Assembly.

She said she would meet with investors who have signified interest in doing business in Mindanao.

As for the audit results, Lopez said the DENR has been taking its time to ensure a comprehensive audit report covering all angles and meeting current environmental standards.

She reiterated previous statements given to reporters asking about the audit results, saying more than 10 mines were to be suspended “because of many violations [of environmental protection regulations].”

This is in addition to the 10 companies whose permits were suspended during the past 12 weeks.

“We’re still discussing [the results] because I don’t want to just say yes or no [suspend or not suspend],” Lopez said. “I have to give recommendations.”   SFM