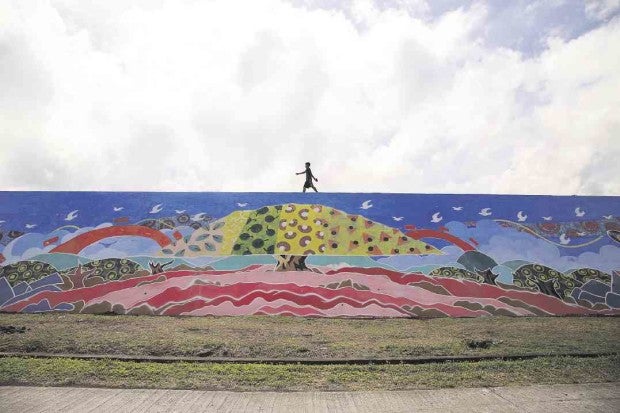 REMEMBERING The pain of remembering the devastation wrought by Typhoon “Reming” on Albay province 10 years ago has been eased by images of hope and strength in a mural painted by survivors. MARK ALVIC ESPLANA

Jane Recto, a nurse, and Joyce Cuadra, an architect, spent their spare time recently at a dike in the village of Maipon in Guinobatan, Albay province, carrying with them cans of paint and brushes.

For them and about 900 others, the activity was part of healing and remembering as they retold stories of hope amid adversity through colorful images drawn on a 300-meter stretch of the dike.

In 2006, they survived the wrath of Typhoon “Reming” (international name: Durian), which pounded Albay and the rest of the Bicol region with winds peaking at more than 300 kilometers per hour. Most did not know each other but they shared dreams of a new life while emerging from devastation.

Reming left at least 1,200 people dead and missing, and millions of pesos in destroyed property.

Recto, 25, said working on the 6-meter-high mural with Mayon Volcano as backdrop gave her a chance to retell a story of survival.

“Remembering Reming was horrible for me and my family. Nothing was left [to us] … our house was washed out by floodwaters,” said a teary-eyed Recto, who was in third year high school when the typhoon struck.

Her family survived through the help of friends and relatives. “Through this work of art, other people, especially those who have no idea of what happened during Reming, will learn something,” she said.

The dike that served as a concrete canvas was built after the typhoon ravaged local communities.

Painted around the theme “Pagsalingoy” (to reminisce), the mural bears images depicting hope, camaraderie and resilience of Albayanos to build their lives anew. Volunteers, who included local artists, professionals, students and residents, took two weeks to finish the artwork, which was unveiled on Sept. 14.

Cuadra, 32, of Legazpi City, said the mural serves as an inspiration to people viewing it. “I’m privileged and honored to be part of this project. Through this medium, I can convey my experience in overcoming hardship after the typhoon,” she said.

“Reming was devastating. Our house was swamped with floodwater. To avoid drowning, we stacked up tables and positioned ourselves on the topmost tier for several hours until water receded,” she said.

Cuadra said she learned not to lose hope, especially during times of calamity.

Djai Tanji, 31, a visual artist from Legazpi, drew a sun to depict “pagbangon” (rising). “It symbolizes hope, happiness and a bright future … [especially] after the devastation,” she said. 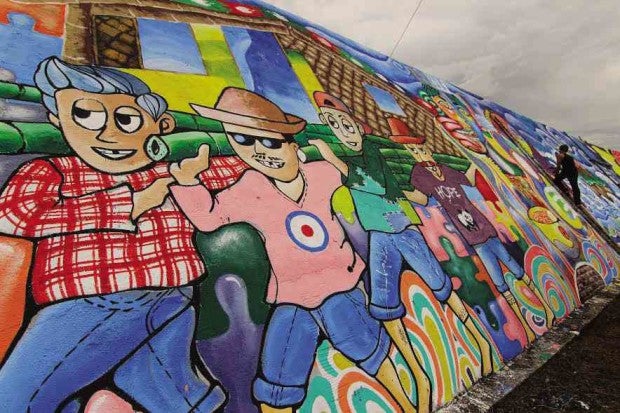 THE SPIRIT of “bayanihan” (community cooperation) is shown in the mural in the village of Maipon in Guinobatan town, Albay. GEORGE GIO BRONDIAL

“This is the trait Filipinos did not lose. As what we usually say, the Filipino spirit is waterproof. If people were selfish, we won’t have progress, development will never happen,” he said.

Loquinario wanted the mural to remind people of those days in November, 10 years ago, when Reming crossed Bicol.

“When I was doing my part in the mural, I can’t control my emotion as I remembered Reming. The memories kept flashing back …. I witnessed people dying as they were being washed away by floodwaters,” he said.

Artist Buddy Relorcasa, 24, illustrated women survivors in a series of facial expressions transitioning from sadness to glee. These represented the nature of Albayanos, which kept them afloat despite tragedies, he said.

Joeper Ofracio, 34, a government employee, said that while sketching was the hardest part of the activity, he was inspired to move on knowing that he was doing it to portray how people coped during those days.

“With this, we tell the value of coming together, of resiliency. It is a celebration of hope, showcasing the human spirit of unity,” Convocar said.

“It is a reminder that we should always be vigilant because another typhoon, like Reming, will come again,” he said.