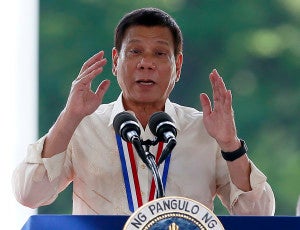 PILI, Camarines Sur — With the Sept. 2 night market bombing in his home city of Davao still in his mind, President Duterte ordered the military on Wednesday, to “learn to adjust” so government troops could fight terrorists.

Addressing soldiers at the 9th Infantry Division (9th ID) headquarters in Camp Elias Angeles here on Wednesday afternoon, the President said: “Terrorism will come, I am sure. When? I do not know. Learn to adjust.”

Mr. Duterte also ordered military officials to come up with a doctrine on how to deal with terrorism and promised them support in terms of firearms and equipment.

The blast at the Roxas night market in Davao killed 15 people and wounded 69 others.

Mr. Duterte arrived at the camp at 3:20 p.m. and held a 45-minute closed door meeting with officials of the Armed Forces of the Philippines’ Southern Luzon Command.

Duterte is the first Philippine president to visit the 9th ID headquarters, the base of government troops in the Bicol region, since it was established in 2004.

Pramis said the military has been equipped with knowledge and training to fight terrorism.  SFM