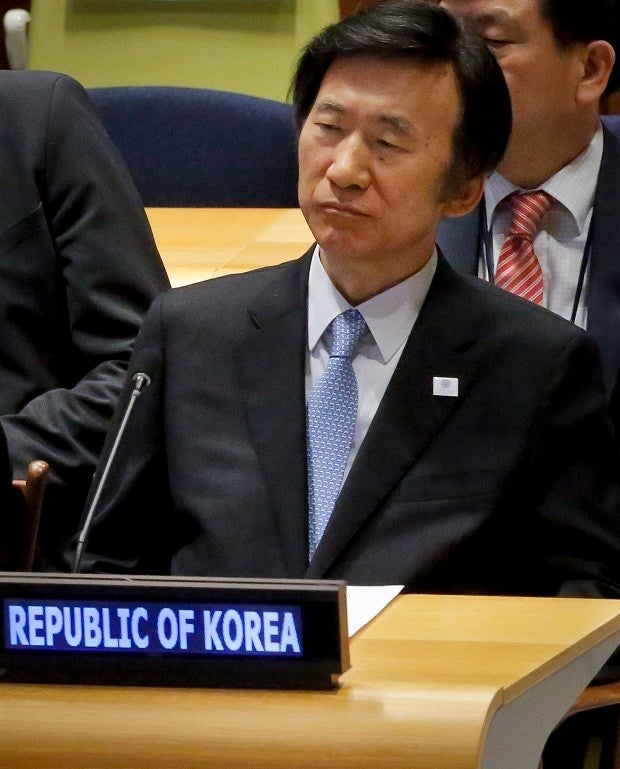 Foreign Minister Yun Byung-se stopped short of calling for Pyongyang’s expulsion from the UN but said its authoritarian government was violating the terms under which both the Koreas had been admitted 25 years ago. He said the North had “broken records” in its violation of global norms: It is the only nation to have conducted nuclear tests in the 21st century and is already subject to five Security Council resolutions over its weapons testing.

“I think all members of the UN have to ask themselves whether North Korea is really qualified as a member of the UN,” Yun said in an interview late Tuesday said on the sidelines of the annual gathering of world leaders at its headquarters in New York.

Calling North Korea a “serial offender,” he said the Security Council, the UN’s top decision-making body, needs to close loopholes in existing sanctions and impose tough new measures in response to the North’s fifth and most recent atomic test. He said that the “Hiroshima-sized explosion” Sept. 9 made clear that Pyongyang poses an “existential threat” to its US-allied southern neighbor and a growing menace to the world.

“This latest test is a very sobering reminder (that) the danger and the threat from North Korea is now reaching a very, very dangerous stage. For many years we have been talking about the development of North Korea’s nuclear weapons and missiles, and now we may be reaching a stage where we have to worry about the deployment of nuclear-tipped missiles,” Yun said.

“If that day comes, that’s not just a threat to South Koreans or to Japanese, it’s a threat to the United States and almost all members of the international community,” Yun said. He described the ongoing negotiations over a new Security Council resolution as a “last chance … to check this fanatic behavior” of young leader Kim Jong Un.

READ: US, Japan scramble for ‘strongest’ sanctions vs N. Korea

In a fresh sign of defiance, Kim oversaw a ground test of a new rocket engine and ordered a satellite launch preparation, North Korean state media said Tuesday, an indication the country might soon conduct a prohibited long-range rocket launch — possibly to coincide with the 71st founding anniversary of the ruling Workers’ Party which falls Oct. 10. Commercial satellite imagery confirmed activity consistent with preparations for such an engine test.

The United Nations and others view the North’s space launch development project as a cover for tests of missile technology, as ballistic missiles and rockets in satellite launches share similar bodies, engines and other technology. The North has conducted more than 20 launches of various types of missile this year. Yun also voiced concern that the North was accelerating its accumulation of fissile material with a view to mass producing nuclear bombs.

North Korea has said it needs nuclear weapons and missiles to cope with US military threats. About 28,500 US troops are stationed in South Korea, a legacy of the 1950-53 Korean War which ended with an armistice, not a peace treaty.

Yun dismissed repeated North Korean calls for the US and South Korea to scrap annual military exercises, which it describes as a preparation for invasion. Some experts argue that could provide a diplomatic opening. Aid-for-disarmament talks have been stalled since 2008, and Washington says they can restart only if the North recommits to denuclearization. Yun said the North uses its argument over military exercises as an excuse as it pursues weapons development.

“We should not play their game,” he said.

Yun welcomed a meeting Monday between President Barack Obama and Premier Li Keqiang of China — the North’s main trading partner and traditional ally, in which both countries condemned the recent nuclear test and pledged closer coordination on addressing the nuclear threat from Pyongyang.

China is critical not only for enforcement of sanctions but agreeing to tougher measures, as it is a veto-wielding member of the Security Council.

The North was already slapped with the toughest UN sanctions in two decades following its fourth nuclear test in January. Yet Kim has doggedly pursued a dual strategy of seeking economic growth while developing nuclear weapons, with some apparent success. After the September test, North Korea’s state news agency cited a foreign ministry spokesman as describing sanctions as “laughable.”

Yun said the case of Iran showed that sanctions take time to have an impact. He said the restrictions were starting to bite. He cited an increase in defections of members of the North Korean elite who were willing to risk imprisonment or execution to escape the country for South Korea as they see no future living in the North.