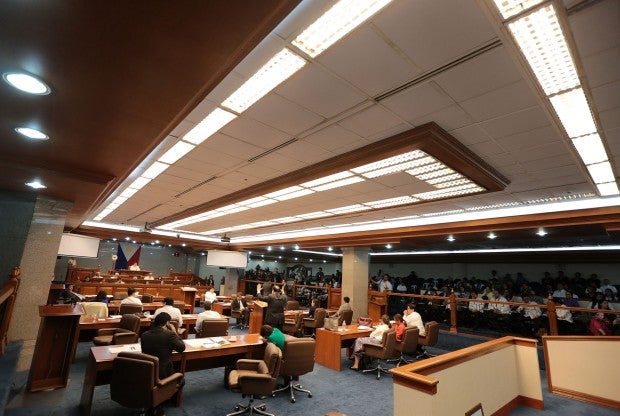 BELIEVE it or not, President Duterte had no hand in clipping the powers of his chief critic in the Senate, his allies in the chamber said on Tuesday.

The President’s supporters claimed that the removal on Monday of Sen. Leila de Lima as chair of the Senate committee on justice and human rights was unplanned.

“[I] can only speak for myself. President Duterte did not influence me at all nor did he even try to. My decision was my very own decision,” Senate President Aquilino Pimentel III told the Inquirer in a text message.

Senate Majority Leader Vicente Sotto III also vouched for the independent vote, saying the majority that prevailed on Monday was only after “the good of the country.”

De Lima’s ouster may have clearly drawn party lines, but the lawmakers said they had decided on their own accord, citing the junior lawmaker’s alleged bias against the administration in the conduct of her investigation.

De Lima, among the most vocal against Mr. Duterte’s approach to stopping illegal drugs, has pinned her ouster squarely on the President.

As for her statement that Mr. Duterte was behind her ouster, Panelo said the President was not interfering with the affairs of a coequal branch of government or influencing its actions. “Such intrusion is anathema to his character,” he added.

Presidential Communications Secretary Martin Andanar said Malacañang was independent of the Senate and was not meddling in the legislature’s affairs.

De Lima’s removal followed the speech of Mr. Duterte’s defeated running mate, Sen. Alan Peter Cayetano, who scored her handling of the hearing, including the presentation of a “surprise witness,” Edgar Matobato.

Matobato, confessed member of the DDS, told the Senate last week that Mr. Duterte was the brains behind the DDS, which killed some 1,000 people, mostly crime suspects, in Davao City, when the latter was mayor.

A total of 16 senators voted to remove De Lima, while three of her Liberal Party (LP) mates voted “no” to the proposal, along with Sen. Risa Hontiveros of Akbayan, who also ran under the LP in the May elections. The minority bloc led by Senate Minority Leader Ralph Recto did not participate in the vote.

“He (Mr. Duterte) has nothing to do with the Senate’s action,” Sotto said.

He said his colleagues in the chamber “have been uncomfortable with how the hearings were being conducted.”

“Although we want an independent Senate, in the same way, we do not want an adversarial Senate. It is not healthy for the country. Independence from both subservience and antagonism is why we acted,” Sotto said.

Sen. Panfilo Lacson, chair of the committee on public order and dangerous drugs, which jointly led the inquiry into extrajudicial slays, said he had no prior knowledge of the plan to call for De Lima’s removal, a move that started as

Pacquiao is a member of the administration party PDP-Laban and a staunch ally of the President.

“First, I have not talked to President Duterte since the start of the election period. Second, nobody, much less a senator, discussed with me the matter of reorganizing the justice committee, until Senator Pacquiao whispered to me that he would take the floor and move for such reorganization while Senator Cayetano was delivering his privilege speech,” Lacson said.

If at all there was a “conspiracy” to kick De Lima out of the committee, Lacson said, “I was not part of it.”

Sen. Sherwin Gatchalian also said the President “was not involved in any way” in the majority decision against De Lima, adding that his decision was “difficult.”

Gatchalian criticized how De Lima conducted the committee hearings, saying it “had become a hollow vehicle for the fulfillment of personal political vendettas.”

Sen. Paolo Benigno Aquino IV, however, expressed disappointment at the turn of events.

He told reporters that LP senators were not consulted about the plan, even while they were part of the majority bloc.

Aquino gave the interview before LP members in the chamber decided to stay in the majority, save for De Lima.

Sen. Francis Pangilinan said the vote simply showed that numbers decided issues at the chamber. He said the episode was a “reminder” of the need to maintain an independent Senate.

“This we intend to pursue. We will support measures that we believe will be beneficial to our citizens and we will be critical of measures we believe will not be good for the country,” Pangilinan said in a statement.

Without making a particular reference to De Lima, Sen. Juan Miguel Zubiri said: “If some persons want to expose certain issues about the President, their proper recourse is to impeach him.” With a report from Leila B. Salaverria