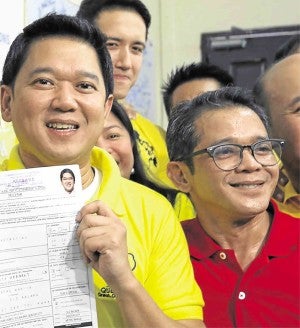 MANILA — The former live-in partner of Quezon City Councilor Hero Bautista has been missing since last week, her family revealed in a report to the Quezon City Police two days after she disappeared.

Her mother, Emiliana Santos, said she was last seen at around 7:30 p.m. at their condominium in Eastwood City, Barangay Bagumbayan.

Santos said her daughter went out that Monday night saying she would just buy drinking water and meet someone. Choi, however, has not come back, nor communicated with them in any way, since then. This prompted Santos to report the disappearance to the police two days after.

Choi’s name was mentioned in previous reports two years ago when she was identified as the former live-in partner of the city councilor who recently submitted himself for rehabilitation after he tested positive for drugs.

The reports mentioned that a case of grave threat was filed against a certain Wilfredo Valerio, identified as the live-in partner of Choi at that time. A witness allegedly identified Valerio as the suspect in a plot to kill Bautista.

On Tuesday, reports surfaced that Choi was also involved in drugs and that she was even linked to the slain sister of actress Maritoni Fernandez, Aurora Ma. Moynihan.

“Those are just speculations but that is part of our investigation,” the QCPD chief, Senior Supt. Guillermo Lorenzo Eleazar, said.  SFM