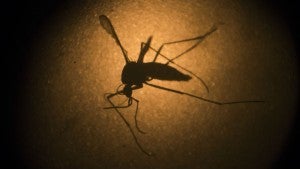 An Aedes aegypti mosquito is photographed through a microscope at the Fiocruz institute in Recife, Pernambuco state, Brazil, Wednesday, Jan. 27, 2016. AP PHOTO

MANILA — There are six new cases of Zika virus in the country, according to the Department of Health (DOH).

This brought to nine the total number of locally transmitted Zika virus cases in the Philippines this year, with ages ranging from 9 years old to 49 years old., the DOH said on Tuesday.

In a press briefing, DOH Spokesperson Eric Tayag said the six new cases had no history of travel to other countries within a month preceding the onset of illness.

“All exhibited skin rashes accompanied by joint pains, or fever or conjunctivitis, but they are expected to have recovered by this time,” he said, adding that the patients acquired the virus through mosquito bites.

Zika, which resembles a light case of the flu, is transmitted by mosquito specie Aedes aegypti.

However, some pregnant women who get infected by the virus give birth to children with microcephaly, a rare condition where “a baby is born with a small head or the head stops growing after birth.” Zika virus causes other brain deformities in newly born babies.

Tayag added that based on initial information they gathered, the four new cases in Iloilo City were not connected to the three Zika cases earlier reported in the area, as the areas where the two groups of patients lived were than 10 kilometers apart.

Tayag stressed that the DOH has not recommended any travel restriction to Iloilo City, where most of the cases have been reported.

He explained that the city could be declared Zika-free again if no new case of the virus would be reported in the next 45 days.

“We have to protect ourselves from getting bitten by mosquitoes. There are safe insect repellants that pregnant women can use to prevent mosquito bites,” the DOH official added.

World Health Organization Representative in the Philippines Gundo Weiler said the rise in the number of cases meant that the health department has been proactively testing for Zika.

“The fact that we see more cases confirmed also reflects that the Department of Health is testing more proactively… the criteria necessary for someone to be eligible for testing has been widen in a way. That to say is a development which is welcome because we will understand in the future about the real circulation of Zika the country,” Weiler said.

“We are working closely with the Department of Health on this. The National Zika action plan that has been already devised in the beginning of the year and that has already been updated based on the better understanding of the epidemic of Zika here in the Philippines and also globally,” he added.

The Research Institute for Tropical Medicine has enough reagents to carry out tests for over 1,000 suspected cases, but the health department intends to acquire 8,000 more test kits.

Apart from nine cases this year, five other cases of Zika virus infection had been detected since 2012, with four foreigners acquiring the infection from abroad.  SFM