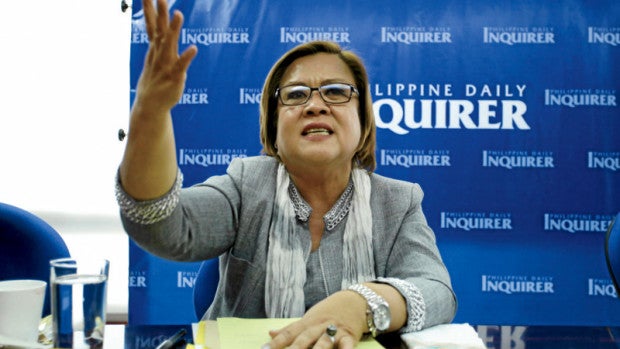 Some senators explained on Tuesday why they voted to unseat Senator Leila de Lima as chair of the Senate  committee on justice and human rights investigating the alleged  extrajudicial killings under the present administration.

In a statement, Sen. Sherwin Gatchalian said Senate committees “are tasked with shaping policy direction and crafting legislative reforms. Unfortunately, under the leadership of Senator De Lima, the committee on justice had become a hollow vehicle for the fulfillment of personal political vendettas.”

“We simply had to put a stop to that,” Gatchalian’s statement said.

He said the decision “was a difficult one.” But he added that “In the end, I am confident that we made the right choice to protect the integrity of the Senate and to safeguard its reputation as a true and faithful instrument to further the interests of the Filipino people.”

Gatchalian with 15 other senators voted to unseat De Lima, who was replaced by Sen. Richard Gordon.

For her part, Sen. Grace Poe said she voted to remove De Lima because she believed that the focus of the committee should be on “the evidence and the testimonies of the resource people, and not on the personalities presiding on and hearing the case.”

“I believe that the case should be heard without the suspicion of bias against the chair or any of the committee members for that matter. Otherwise, the committee and the public get distracted with possible grandstanding, polar bickering and partylines,” Poe said in a statement.

Senator Joel Villanueva said he had a number of reasons why he voted to oust De Lima, including her “rookie mistakes” in handling the hearings.

“The issue is serious and she’s dragging us all. She did not follow some of the rules of the committee,” Villanueva said over the phone.

He cited how De Lima kept other members of the committee in the dark when she pulled a surprise and presented Edgar Matobato as a witness during last week’s hearing of the body.

Villanueva said it would be better for De Lima to become just a member of the committee so she could continue her advocacies.
Senator Joseph Victor Ejercito said De Lima’s ouster was a “collective decision” by members of the majority in the chamber, which included him, saying they were already concerned with the “continuous effort to destroy” President Rodrigo Duterte.

“It is dragging the whole country down as evidenced by the international media’s portrayal of the Philippines at present,” Ejercito said in a separate statement.

“The Duterte administration is only three months old, let’s give it a chance. Any uprising or upheaval will not be good for the country at this point in time. We’ve had 2 Edsa revolts, and it didn’t help improve our country’s situation,” Ejercito added. 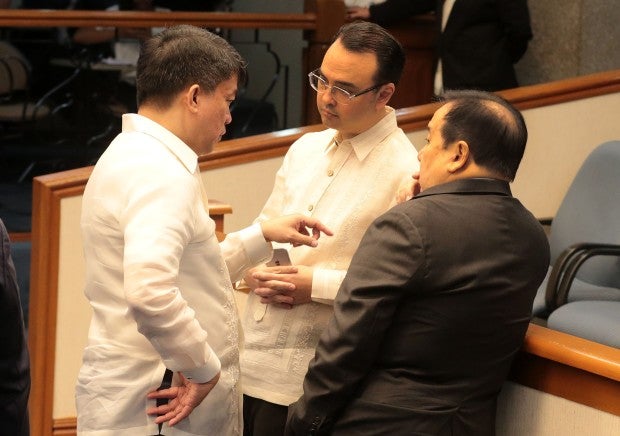 Senate Majority Leader Vicente “Tito” Sotto III, who also voted against De Lima, said this should serve as an example that the Senate should remain objective and perform its mandate in aid of legislation.

“I urge my fellow senators not to use their committees as a venue to besmirch anyone, to remain impartial and do not allow anyone to use our chamber for grandstanding and mudslinging,” Sotto said after the voting Monday night.

But for Sen. Bam Aquino, who voted against the ouster, said the independence of the institution was now put to the test after the majority of his colleagues ousted a known Duterte critic.

“The vote that transpired was unnecessary and unprecedented. Now, our institution’s independence is seriously put to the test,” Aquino said in a statement Monday.

“The new leadership of the Committee on Justice must show that it is fair, unbiased and committed to bringing out the truth at all costs,” he added.