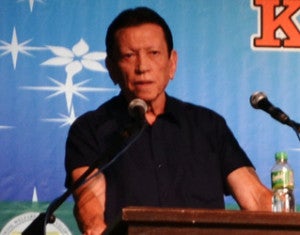 The order on Monday, suspended Zubiri for grave abuse of authority amounting to oppression and violation of a section of Republic Act 6713, the Code of Conduct and Ethical Standards for public officials.

The Ombudsman based its ruling on the case of Carlos Ycaro, a former provincial government employee who accused the governor of refusing to sign his clearance and his request for leave commutation.

But in a statement, Zubiri said he was not the provincial governor from July 1, 2010 to June 30, 2013 when Ycaro sought clearance.

Zubiri said he learned that Ycaro could not account for chairs owned by the local government of Bukidnon amounting to P3.25 million; and the electrification, installation and supply of equipment with a total worth of P8.1 million.  So far, only P868,472 worth of government properties and assets were accounted for.

Aside from the fact that Zubiri was not the proper person to act on Ycaro’s application, the governor said Ycaro has not proven that he has complied with all the requirements for his clearance.

Zubiri added that if he were the proper authority to sign Ycaro’s clearance, “prudence and my conscience would dictate that I would rather not sign due to the fact of his ‘unaccounted’ items which are valued in millions.”

Zubiri said he was offended by the fact that the Ombudsman already released a statement on his suspension even before Zubiri received a copy of the resolution.

“On the contrary the charges we filed against Mr. Ycaro before the Office of the Obmdusman-Davao have not been acted upon yet and no update to this moment has been received by the Provincial Government of Bukidnon,” he added.

He clarified that in his 28 years in public service, he has not oppressed anybody and in fact, he has even defended the province’s indigenous peoples and the poor.  SFM