ZAMBOANGA CITY—Two Filipino kidnap victims were freed by their Abu Sayyaf captors on Sunday night under sustained military air and ground operations on Jolo island, the Armed Forces of the Philippines announced on Monday.

Daniela Taruc and Levy Gonzales, described as employees of a telecom subcontractor, were released in Panglima Estino, a town just south of Patikul, from where they were kidnapped on Aug. 6, according to Lt. Gen. Mayoralgo dela Cruz, chief of Western Mindanao Command based in Zamboanga City.

The two were reportedly rescued by a “concerned citizen” following their release and were taken to the headquarters of the Joint Task Force Sulu for medical examination, according to the AFP headquarters.

Dela Cruz told the Inquirer that more hostages were expected to be freed following the relentless operation in areas with reported presence of Abu Sayyaf Group (ASG) on the main Jolo island in the Sulu province archipelago.

“We are not stopping until they are destroyed. We have a strong mandate to destroy these bandits,” Dela Cruz said.

“Simultaneous land, air, naval and police operations complemented each other putting pressure on the ASG,” he added.

The release of the Filipino telecom workers came a day after Norwegian Kjartan Sekkingstad and Indonesian fishermen Teo Doros Kofong, Lorence Koten and Emmanuel Arakian were freed on Saturday.

Sekkingstad and three others were taken from a marina in the Island Garden City of Samal in Davao del Norte province on Sept. 21 last year. 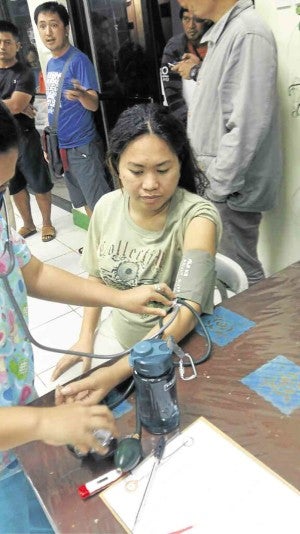 FREED Filipinos Levy Gonzales and Daniela Taruc are examined by doctors at a military hospital in Sulu province shortly after they were released by their Abu Sayyaf captors. PHOTO COURTESY OF WESMINCOM

His fellow captives, Canadians John Ridsdel and Robert Hall, were beheaded in April and June, respectively, when the bandit group failed to receive the ransom money it had demanded.

The three Indonesian fishermen were kidnapped in Lahad Datu in Sabah, Malaysia, on July 19.

Both the Indonesian government and the Philippine military recognized the big role of the Moro National Liberation Front (MNLF) in Saturday’s release of Sekkingstad and the Indonesian hostages.

“We appreciate the assistance of the MNLF. They know very well the terrain, they are very professional and they know what to do,” Indonesian Defense Minister Ryanmizard Ryancudu told reporters on Sunday night.

“The MNLF knows the terrain. They know some of the people from the Abu Sayyaf and they have their own ways of dealing with the Abu Sayyaf,” Dela Cruz said.

But Dela Cruz also said President Duterte’s directive to destroy the bandit group resulted in efforts involving military, police, local government and even the MNLF to rescue the hostages. He said at least 16 battalions had been sent to Sulu for the operation.

“In fact, some of the civilian populace are giving us information and this is to our advantage, and hopefully in the coming days, this support will reduce and degrade the Abu Sayyaf into an insignificant level,” Dela Cruz added.

MNLF spokesperson Samsula Adju said Tahil Sali, the MNLF vice chair for political affairs, had worked hard for the release of the hostages. 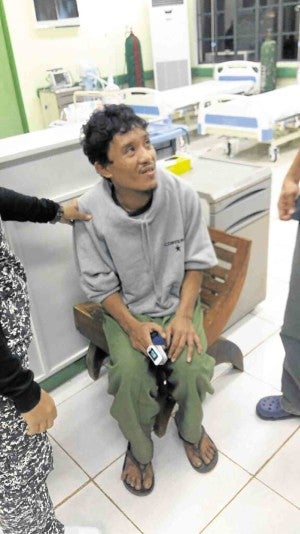 FREED Filipinos Levy Gonzales and Daniela Taruc are examined by doctors at a military hospital in Sulu province shortly after they were released by their Abu Sayyaf captors. PHOTO COURTESY OF WESMINCOM

Sali was authorized by MNLF chair Nur Misuari to negotiate with the Abu Sayyaf leader, Radulan Sahiron, for the  release of Sekkingstad.

Adju said no ransom was paid in exchange for Sekkingstad’s freedom in accordance with the MNLF policy.

Muammar Askali, alias “Abu Rami,” who claimed to be the spokesperson of the Abu Sayyaf, earlier said P30 million was paid as ransom.

Brig. Gen. Restituto Padilla, AFP spokesperson  in Manila, expressed confidence that more of the 16 hostages, 12 of them foreigners, held by the Abu Sayyaf would be rescued as a result of military pressure.

The foreign hostages include six Indonesians, five Malaysians and one Dutch.

Based on the AFP’s monitoring, Padilla said, most of the hostages were in “good condition” and that the Abu Sayyaf was no longer engaging the pursuing soldiers.

“Their world is getting smaller and it will be soon before we will be able to solve this,” Padilla said. “We’re not giving a timeline but we’re doing our best to bring resolution to this problem that we face in relation to this group,” he added. With a report from Cynthia D. Balana in Manila