Gov’t to push for withdrawal of arrest warrant vs Misuari 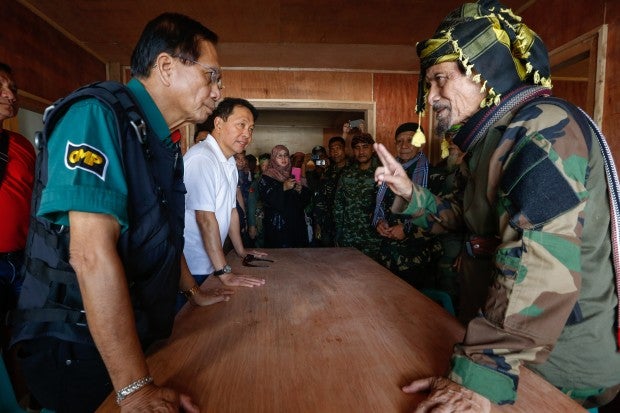 Presidential Peace Adviser Jesus Dureza discusses with Moro National Liberation Front (MNLF) Chairman Nur Misuari during a hand-over ceremony in Jolo, Sulu. A Norwegian and three Indonesian seamen held hostage by the Abu Sayyaf Group are turned over by the MNLF to the government envoy on September 18. SIMEON CELI/ PPD

The government will withdraw the arrest warrant against Moro National Liberation Front (MNLF) founding chairman Nur Misuari as part of the administration’s effort to pursue peace negotiations with the Moro rebels.

Justice Secretary Vitaliano Aguirre II on Monday said he had talked to Presidential Adviser on the Peace Process Jesus Dureza on the matter.

“That is part of the peace talk. I think there will be no problem with respect to the MNLF. Nagusap na kami ni Secretary Dureza, meron na kaming gagawin dun (Secretary Dureza and I have talked about it, we have a plan on the arrest warrant),” Aguirre said.

Misuari and his key commanders Ustadz Habier Malik, Assamin Bas Arki and Assamin Hussin and hundreds of accused were charged with rebellion and violation of Republic Act 9851 or the Philippine Act on Crimes Against International Humanitarian Law, Genocide, and Other Crimes Against Humanity in connection with the 2013 Zamboanga seige.

The charges were initially filed before the Zamboanga Regional Trial Court (RTC) but it was transferred to the Pasig RTC upon the orders of the Supreme Court due to security consideration. RAM/rga