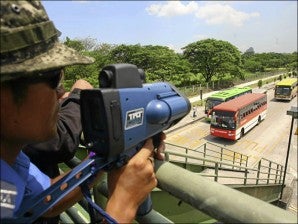 There is now a recommendation from police authorities that the 60-kph speed limit be applied on all Metro Manila roads.

“We started on Monday morning and by Saturday morning, we have netted 120 violators on Commonwealth Avenue and Regalado Avenue, mostly buses and some trucks,” said Alberto Suansing, team leader of the Run After Speed Violator (RASV) task group, in a media forum yesterday.

It was created following the death of veteran journalist and University of the Philippines professor Lourdes “Chit” Estella-Simbulan on May 13.

Simbulan was killed on Commonwealth Avenue after the taxi she was riding in was hit by a passenger bus.

The bus driver, Daniel Espinosa, gave himself up to authorities on Thursday night in Davao City after days in hiding.

RASV operatives chase speeding vehicles on motorcycles, and confiscate the license of their drivers, as well as the license plates of their vehicles.

“We change our hours of operation, but what is notable is that we catch someone every hour,” Suansing, a DOTC consultant, said.

He added, however, that there had been “marked changes” on the so-called “killer highway” since RASV came on the scene. “The buses have started ‘crawling.’ They only try their luck in other areas, like on the way to Regalado Avenue,” he said.

The group is set to expand its area of operations this week, Suansing told reporters. “We will start monitoring other roads like Quezon Avenue since bus drivers tend to race each other there. We may also include the stretch on Edsa from Ortigas to Boni Serrano.”

At the same time, Suansing recommended that the 60-kph speed limit be applied on all Metro Manila roads.

He also called on local governments to strictly enforce traffic laws to instill discipline in drivers. “Bus drivers consider traffic rules as mere suggestions. They think violations can be talked over because there are enforcers that do make a business out of it,” he pointed out.

Aside from stepping up apprehensions and law enforcement, Suansing said the DOTC was looking into shortening bus routes and regulating the work hours of bus drivers, some of whom work from 4 a.m. to 11 p.m. daily.