Trump bashes Clinton as far too soft on immigrants 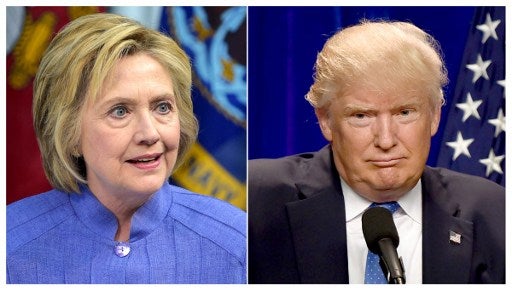 HOUSTON, United States—Donald Trump took his campaign to Texas on Saturday, bashing Hillary Clinton’s immigration policies as too lax, in a state still up for grabs on Election Day.

With polls showing a tightening race just over seven weeks before the November 8 election, the Republican candidate turned up the vitriol, saying that as president, his Democratic rival would virtually end border enforcement and place the country “in grave peril.”

Trump was speaking a day after a much-hyped televised event in which, after years of questioning whether Barack Obama was an American citizen, he finally declared that the president “was born in the United States, period.”

But he also made the surprising charge—refuted by fact-checkers—that it was Clinton who originated the “birther” theories about Obama.

On Saturday, speaking before a sympathetic audience that included people who said their friends or family members had been killed by undocumented immigrants, Trump continued his sharp attacks on Clinton.

The immigration issue has been central to Trump’s campaign since he said last summer that many Mexican immigrants were drug smugglers and rapists. The candidate made it clear Saturday that he is not about to give up on the attack line, even at the risk of offending many Hispanic voters.

Trump asserted that Clinton would “implement amnesty by executive order, violating our constitution and putting the entire nation in grave peril.”

Clinton has called for a softening of immigration practices, saying she would deport only violent criminals and terrorists, a position in stark contrast to Trump’s vow to build a border wall and deport huge numbers of the undocumented.

His suggestion that immigrants are disproportionately responsible for serious crime appears unfounded, according to several studies.

However, Trump insisted on Saturday that Americans are being killed on a daily basis by the undocumented.

“Every day our border remains open, innocent Americans are needlessly victimized and killed,” he said.

“Every day we fail to enforce our laws… a loving parent is at risk of losing their child.”

While he repeated his charge that Clinton would introduce “total amnesty in the first 100 days, which means Obamacare, Social Security and Medicare for illegal immigrants,” her website does not mention amnesty.

It does promise to “introduce comprehensive immigration reform with a pathway to full and equal citizenship within (the) first 100 days,” lifting the threat of deportation in many cases.

Clinton, who returned to the campaign trail Thursday after a bout with pneumonia, has pressed the theme that her Republican rival is unfit to be president.

“His campaign was founded on this outrageous lie” about Obama’s birth, she said. “There is no erasing it in history.”

“He’s feeding into the worst impulses, the bigotry and bias that lurks in our country,” she added.

“My name may not be on the ballot, but our progress is on the ballot,” Obama said. “You want to give me a good sendoff, go vote!”

Democrats are increasingly worried about poll numbers during a week that Clinton lost momentum.

She fell ill last week during a 9/11 memorial ceremony in New York, where she was seen stumbling limp-legged into her vehicle, an episode that raised tough questions about her overall health and her campaign’s transparency.

Polls show the lead she has held over Trump narrowing quickly. One survey gave her just a two-point margin, down sharply in a matter of weeks, boosting worries she is ceding the stage to Trump as time runs out on the campaign clock.

Two of the Democrats’ liberal stars, Bernie Sanders and Elizabeth Warren, were campaigning for Clinton in Ohio on Saturday to drum up support among the young people whose votes she needs on election day.

Sanders ripped into Trump about the “birther” controversy.

“What they were trying to do,” he said at a rally, “is to de-legitimize the presidency of the first African-American president we have ever had.”

Employing a different line of attack on Friday, Trump again raised the threat of violence against Clinton, suggesting during a rally in Miami that Clinton’s Secret Service guards voluntarily disarm and “see what happens to her.”

“I think that her bodyguards should drop all weapons,” the real estate billionaire told a cheering rally. “Take their guns away. She doesn’t want guns. Take them. Let’s see what happens to her… It will be very dangerous.”

Clinton campaign manager Robby Mook condemned Trump’s widely criticized remarks, saying they “should be out of bounds for a presidential candidate.”/rga

Pro-Clinton? Pro-Trump? Fil-Ams in NY talk about it

Trump closes door on one falsehood, opens door to another