I can’t kill them all, says Duterte 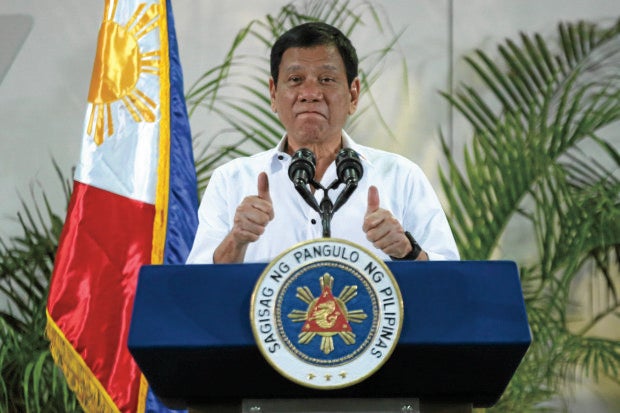 GAMU, Isabela—President Rodrigo Duterte called on the military on Saturday to pick up the war on drugs, after the top cop admitted that the Philippine National Police could not lick the drug menace in six months.

Speaking to troops at Camp Melchor de la Cruz here, Mr. Duterte said he might not be able to prosecute all the people involved in the illegal drug trade because there were so many of them.

Mr. Duterte also gave the troops a preview of his new list containing the names of public officials involved in the narcotics trade.

The President read out the name of Bonnie Sultan, barangay captain of Lumatil, Maasim, Sarangani province, and mentioned Mayor Reynaldo Flores of Naguilian, La Union province, whose name appeared on the narcolist that he released in August.

Mr. Duterte said Flores was a “high value target,” and that the information had been validated.

Another name he repeated was that of retired Chief Supt. Vicente Loot, one of the five high-ranking police officials he publicly linked to the narcotics trade on July 5.

He said the name of Loot cropped up in drug investigations in a swath of the country stretching from the Ilocos region to Calabarzon.

“What does that mean? It means to say wherever he was assigned, he was into drugs,” Mr. Duterte said.

The President said the other people on his list were congressmen, governors, mayors, barangay captains, councilors and police officers.

“They’re in government. How can I build the case [when it’s like this]?” he said, noting the calls from human rights groups for him to build cases and file charges against the suspects.

Mr. Duterte is visiting military camps to explain to troops his brutal war on drugs that has left more than 3,000 people dead since he launched it upon taking office on June 30.

Arriving in dark glasses that he kept on during the first half of his speech, Mr. Duterte implored the Army Star Troopers to take up the fight against drugs, in case he fails to finish his six-year term and leaves the problem hanging.

He said earlier that his new narcolist contained the names of more than 1,000 public officials.

“With this many [names], I can’t kill them all. I might be the one they will kill,” he told the Star Troopers.

“See to it that this country will not take a spin because the whole of the Philippines is affected,” he added.

Mr. Duterte pointed out that under the Constitution, the military is the protector of the people.

“Do not allow the country to disintegrate,” he said.

He also reiterated his promise to protect state forces from prosecution in his war on drugs.

“Just do what is the mandate of the Constitution, and I will take care of you. I will protect you. I will not allow one policeman or one military to go to jail for doing his duty,” he said.

Mr. Duterte made a passing reference to what he had done as longtime Davao City mayor.

“In Davao, I was just strict. There were people who died, which was why I was criticized as a human rights violator,” he said.

But he said that after being elected President, he decided to disclose all he knew about the narcotics trade.

Mr. Duterte did not comment on the allegations of Edgar Matobato, a confessed hit man for the Davao Death Squad, that he ordered the killing of about 1,000 suspected criminals and opponents when he was still mayor of Davao City.

Matobato, 57, threw the allegations at Mr. Duterte as he testified in the Senate on Thursday during a hearing on alleged extrajudicial killings in the President’s war on drugs.

Mr. Duterte promised during the campaign to stamp out the drug menace within the first six months of his presidency.

But the PNP chief, Director General Ronald “Bato” dela Rosa, admitted on Friday that the police could not achieve that goal.

Speaking at a news conference in Naga City, Dela Rosa said he would be happy if the police could reduce the drug problem by 70 percent by January.

After that, he said he would ask the President if he could stay as PNP chief.

“We have three months and 15 days remaining in our schedule. We are still on the right track, although I always say that I am worried that we might fail,” he said.

Dela Rosa said the eradication of the drug problem in six months was an “ambition” that the PNP knew it could not achieve.

According to government records, there are more than 3 million drug users in the Philippines.

More than 3,000 people have been killed in police operations and vigilante attacks since July 1, drawing expressions of concern from the United States, the European Union, the United Nations and international rights groups.

Dela Rosa cited a difference between the local drug war and the fight against narcotics in other countries like Mexico and Colombia.

Dela Rosa said he would travel to other countries to study how the authorities there fight narcotics. With a report from Juan Escandor Jr., Inquirer Southern Luzon/TVJ