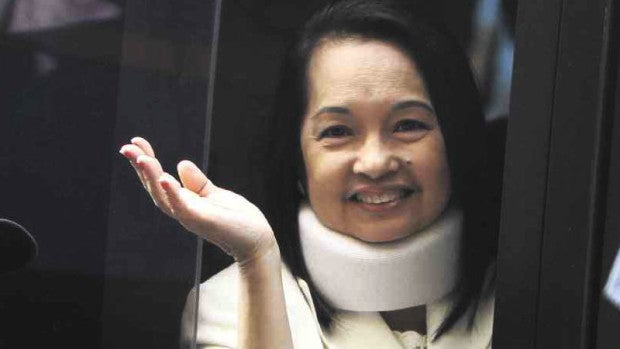 Former President and now Pampanga Rep. Gloria Macapagal-Arroyo, shown in this 2012 file photo, might as well be waving goodbye to the graft charges in connection with the $329-million National Broadband Network deal with China’s ZTE Corp. after the Sandiganbayan granted her demurrer to evidence, giving credence to her argument that the prosecution failed to prove that the contract would be disadvantageous to government. INQUIRER PHOTO

Long vilified after stepping down from the presidency, Gloria Macapagal-Arroyo now basks in legal vindication.

Completing a remarkable turnaround in her fortunes, the former President and now Pampanga representative was exonerated on graft charges in connection with the scuttled $329-million National Broadband Network deal with China’s ZTE Corp.

The Sandiganbayan’s fourth division granted the separate demurrers to evidence filed by Arroyo, her husband Jose Miguel Arroyo and former Commission on Elections Chair Benjamin Abalos, who were also absolved of the charges on Friday.

A demurrer is a motion for dismissal midway through a trial after the prosecution rests its case.

In a 31-page decision penned by Associate Justice Jose Hernandez, the court gave credence to Arroyo’s argument that the prosecution largely failed to prove that the NBN contract would be disadvantageous to government.

It said the prosecution failed to prove that the three, along with a fourth accused, the late former Transportation Secretary Leandro Mendoza, conspired to have the contract awarded to the Chinese corporation as alleged by whistle-blowers Rodolfo “Jun” Lozada and Jose de Venecia Jr.

“This failure to specify the circumstances establishing conspiracy among the four accused is violative of their right to be informed of the accusations hurled against them,” according to the decision.

The court further noted that Arroyo eventually cancelled the contract in October 2007; “thus, legally … there was no more contract to refer to at the time of filing of this case.”

Arroyo was charged with two violations of the Anti-Graft and Corrupt Practices Act and one violation of the Code of Conduct and Ethical Standards for Public Officials and Employees for allegedly having unlawful interest in the NBN project.

She was accused of using the power of the presidency to push for the approval of the proposal submitted by ZTE Corp. though she later cancelled the contract after it generated controversy.

Arroyo’s counsel said this was the third legal victory for the Pampanga lawmaker, who only three months ago was still languishing in hospital detention until the Supreme Court dismissed the plunder case against her involving the alleged misuse of Philippine Charity Sweepstakes Office (PCSO) funds.

“This is the third time our courts have granted her demurrer to evidence. The first time was in the PCSO case. The second time, only last week, was in the civil case filed by UCCP (United Church of Christ in the Philippines. And now this,” the lawyer said.

The UCCP case was a P6 million damage suit filed in July 2011 by the group over the extrajudicial killings of three pastors and two members, and the abduction of another pastor between 2003 and 2006.

“We are thankful to the Sandiganbayan for granting our demurrers in the three ZTE cases. It’s a well-reasoned decision. I encourage the public to read it,” the lawyer said.

What Went Before: The NBN-ZTE deal