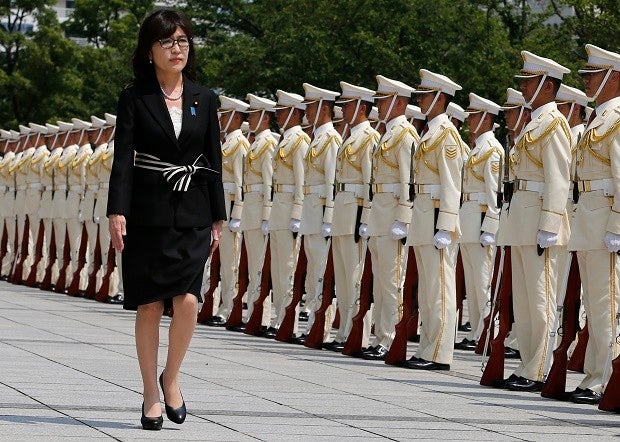 In this Aug. 4, 2016 file photo, Japan’s new Defense Minister Tomomi Inada inspects a honor guard on her first day at the Defense Ministry in Tokyo. Inada, who holds her first meeting with US counterpart Ash Carter on Thursday, Sept. 15, in Washington, D.C., leapfrogged over more senior lawmakers to the defense post in a Cabinet reshuffle on Aug. 3. The 57-year-old lawyer has attracted attention for questioning mainstream accounts of Japanese atrocities during World War II and the fairness of the postwar Tokyo war crimes trials. AP FILE PHOTO

WASHINGTON — Japan will increase engagement in the South China Sea through training cruises with the US Navy and multilateral exercises with regional navies, the nation’s defense minister said Thursday.

Newly appointed minister Tomomi Inada said Japan will also help build the capacity of coastal nations. She was speaking ahead of her first meeting with Pentagon chief Ash Carter in Washington.

Japan, a close US ally, is not among the countries claiming territory in the disputed South China Sea but shares US concern about China’s assertive behavior there.

Japan has a separate territorial dispute with China over unoccupied islands they both claim farther north in the East China Sea. Inada said China has escalated its incursions by its vessels into Japan’s territorial waters around the islands.

However, Inada said she is open to constructive dialogue with China and will expedite negotiations on preventing collisions between their forces at sea and in the air.

Inada took up the defense post last month. The 57-year-old lawyer previously attracted attention for questioning mainstream accounts of Japanese atrocities during World War II, but has been mum on her views of history since becoming defense minister./rga