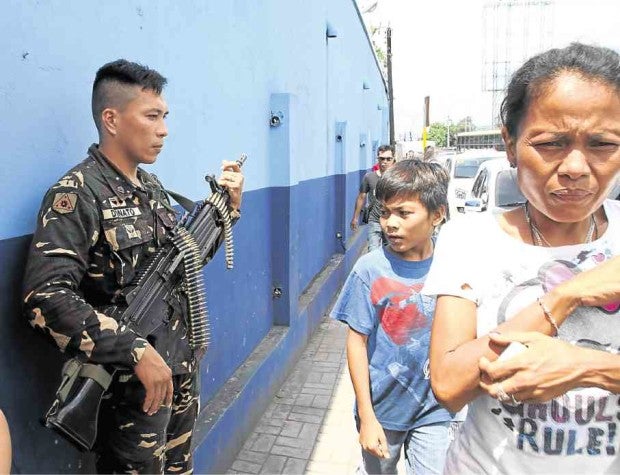 THE IMPACT of the Sept. 2 bombing in Davao City is being felt far beyond Mindanao as security forces, like this soldier in Cebu City, were put on alert for terror threats. More soldiers guard crowded areas, like bus terminals, airports and seaports, and key installations. JUNJIE MENDOZA/CEBU DAILY NEWS

DAVAO CITY—The city government has been given access to the massive intelligence database of International Police (Interpol) under an agreement that city officials said is a first in the country.

Represented by the Public Safety and Security Command Center (PSSCC), the local government has agreed to work closely with Interpol to help keep the city safe and secure.

Benito de Leon, retired general and PSSCC chief, said the city government is the first local government unit to have a formal partnership with Interpol.

The agreement with Interpol, said De Leon, would improve the city government’s intelligence-gathering capacity and help monitor the movement of so-called persons and groups of interests.

It came a few days after 15 persons were killed and 69 others were wounded in a bombing at the city night market on Sept. 2.

Based in France, Interpol is an organization of 190 countries with the key goals of keeping its members updated on security threats and effecting the arrest of international fugitives.

De Leon, however, said linking up with Interpol should not be taken to mean that a foreign group is involved in the Sept. 2 bombing here.

“There is no international group behind (the bombing),” De Leon said. “It is something that is isolated,” he added.

In Cagayan de Oro City, police are tapping hotel workers and guards to help in preventing a terror attack on the city similar to that which hit a crowded night market in Davao City on Sept. 2.

Cariaga told members of the Cagayan de Oro Hotel and Restaurant Association (Cohara) at a meeting here that hotel guards could act as first responders during an imminent attack on the city.

“The police and military cannot do it alone,” he said.

If hotel guards notice suspicious-looking packages, they should immediately seal off the area and call police, Cariaga said.

Hotel workers, Cariaga said, should also report suspicious activity by guests or clients. The reporting, however, should be done discreetly, Cariaga said.

Hotels and other establishments belonging to Cohara should also install security gadgets, like closed-circuit television cameras.

Guards should have a checklist of tasks, like patrolling hotel surroundings.

“Businesses should implement these measures to secure not their structures, but also their guests,” Cariaga said. “They have a moral obligation to protect their guests,” he said.

Hotel clients should be required to present ID cards while nonguests should be barred from entering rooms, Cariaga said.