Senate probe leads to tale of the tape 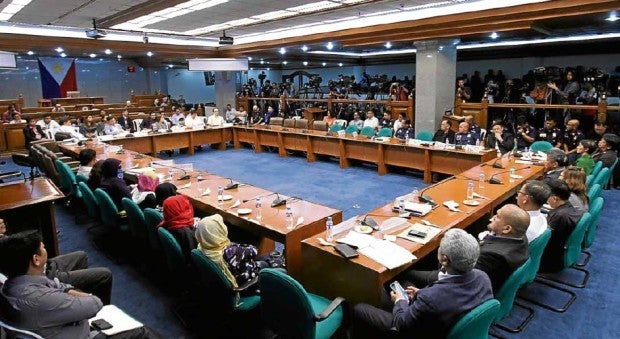 SENATE PROBE The Senate committee headed by Sen. Leila de Lima, a staunch critic of President Duterte, hears the testimony of Edgar Matobato, a confessed hit man from Davao City, as it continues to investigate alleged extrajudicial killings in the Duterte administration’s brutal campaign against illegal drugs. RICHARD A. REYES

As far as Sen. Alan Peter Cayetano was concerned, the testimony of the witness came unglued when he failed to identify the right kind of tape used in the killings he had confessed to being part of.

Cayetano asked the former militiaman, Edgar Matobato, who was presented on Thursday as a witness during the Senate hearing on summary killings in Davao, what kind of tape was used in the executions by the Davao Death Squad (DDS) that the latter claimed he had participated in.

The senator then presented him a bag full of different kinds of adhesive tape and asked him to choose which one he was referring to. Matobato promptly picked a roll of packaging tape out of the lot.

“I call everything here masking tape,” the witness explained. “But that is the kind we use,” he said, pointing to the packaging tape he had picked out.

In his testimony at the hearing on DDS killings being linked to then Davao City Mayor Rodrigo Duterte, Matobato said the mayor, or “Charlie Mike” as he was known to his alleged band of assassins, had masterminded about a thousand summary killings.

Matobato, 57, said he was hired by the mayor as one of his “Lambada Boys” in 1988, and was a “ghost employee” at the Davao City Hall for 24 years as part of the Civilian Security Unit whose job it was to kill criminals.

He said he left the group and entered the witness protection program (WPP) later when his conscience started bothering him, as even innocent civilians were being targeted.

He left the WPP after Mr. Duterte won the presidential elections, Matobato added.

Asked later what he had hoped to achieve in presenting the witness an array of adhesive tapes, Cayetano said, “If you’re in a syndicate or (is a) killer, you know what kind of tape to use.”

If you’re a TV camera operator, you are an expert in all types of cameras and you know which to use for a telenovela or for movies, or for news, the senator said.

“It’s the same (for) killers. They don’t use just any tape (in executions). They buy a specific kind of tape, duct tape or packaging tape because if you use just any tape, it loses adhesion. Masking tape tears easily,” Cayetano said.

“But if you’re a killer and it’s your style, like the style of some drug cartels abroad, there is a purpose (to the) tape that you’d use,” he said.

Asked what he thought of Matobato’s testimony, Cayetano said, “One hundred percent all lies.”