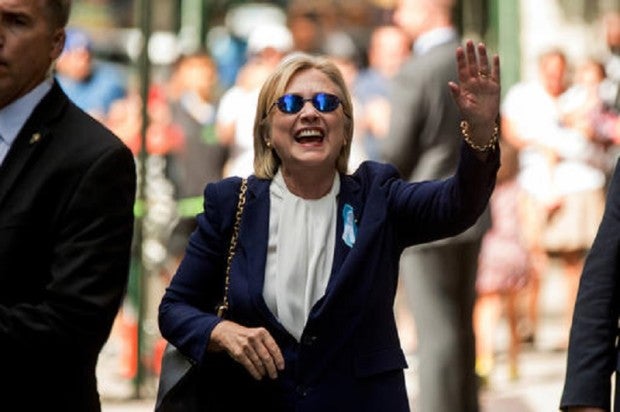 FILE – In this Sept. 11, 2016 file photo, Democratic presidential candidate Hillary Clinton waves after leaving an apartment building in New York. Hillary Clinton’s doctor says she is recovering from her pneumonia and remains “healthy and fit to serve as President of the United States.” The statement was part of medical information Clinton’s campaign released Wednesday, Sept. 14, 2016, after her pneumonia diagnosis last week. (AP Photo/Andrew Harnik, File)

WHITE PLAINS, New York — Hillary Clinton has released a new letter from her doctor declaring her to be “recovering well” from pneumonia and remaining “fit to serve as President of the United States.” The Democratic presidential candidate faces increased scrutiny about her health after a video showed her staggering while getting into a van on Sunday. Her campaign later disclosed she had been diagnosed with pneumonia two days earlier.

The letter released Wednesday by the campaign stated that Clinton underwent a chest scan that revealed she had “mild, non-contagious bacterial pneumonia,” according to her physician, Dr. Lisa Bardack, chair of internal medicine at CareMount Medical in Mount Kisco, New York. She was treated with a 10-day course of Levaquin, an antibiotic used to treat infections.

The letter says the illness stemmed from seasonal allergies that developed into an upper respiratory tract infection. Clinton’s pneumonia symptoms began around the start of this month, and she saw Bardack on Sept. 2 for a low-grade fever, congestion and fatigue.

Clinton, 68, was advised to rest and was put on a short course of antibiotics, but her condition worsened and she developed a cough.

After she become “overheated,” ”dizzy” and “dehydrated” at the 9/11 ceremony, Bardack examined Clinton at her suburban New York home. She found that Clinton was “re-hydrating and recovering nicely.” She’s been evaluated by Bardack several times since and her condition has continued to improve, according to the letter.

Clinton plans to return to the campaign trail on Thursday after several days resting at her suburban New York home.

Bardack did the right tests for her pneumonia and “she’s being treated appropriately,” said Dr. Mark Creager, director of the Dartmouth-Hitchkock heart and vascular center in Lebanon, New Hampshire, and a past president of the American Heart Association.

The letter also notes that in January, during the run-up to the Iowa caucuses, Clinton developed a sinus and ear infection that was initially treated with antibiotics and steroids. After Clinton complained of worsening pain in her left ear over the next few weeks, she received a drainage tube in her left ear and her symptoms improved.

A March CT scan of her brain and sinuses showed no abnormalities and mild chronic sinus inflammation. She remained symptom-free for six months, according to the letter.

Bardack said Clinton is up to date on all vaccines, two given to help prevent pneumonia — Prevnar and Pneumovax. The letter did not state when she received those vaccines.

She takes thyroid and allergy medicines and the blood thinner Coumadin, prescribed as a preventative after she suffered a blood clot resulting from a 2012 concussion.

The blood clot, which was in a vein in the space between the brain and the skull behind the right ear, led Clinton to spend a few days in New York-Presbyterian Hospital and take a month-long absence from the State Department for treatment.

Clinton has blood pressure of 100 over 70. Her total cholesterol was 189; her LDL or “bad” cholesterol was 103, and her HDL or “good” cholesterol was 56 — all within healthy levels and not signaling the need for any medications. She receives routine dental care, had a normal mammogram and breast ultrasound, according to the letter.

The letter from Clinton’s doctor made no mention of her weight, a key part of any medical exam, nor did a similar letter released last year.

“My overall impression is that Mrs. Clinton has remained healthy and has not developed new medical conditions this year other than a sinus and ear infection and her recently diagnosed pneumonia,” wrote Bardack.

Clinton’s health was last detailed in a letter from Bardack released in July 2015. TVJ