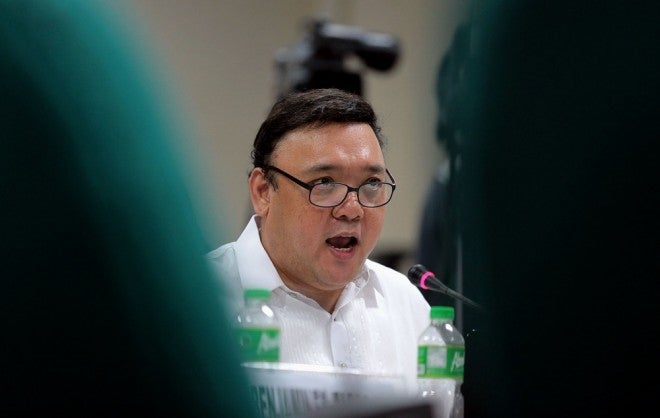 A party-list lawmaker in the House of Representatives questioned the need to grant President Rodrigo Duterte emergency powers unhampered by any existing regulations, which the solon said smacked of giving the President blanket authority even though it violates other laws.

During the transportation committee hearing on Thursday, Kabayan Rep. Harry Roque questioned the need for Congress to grant Duterte emergency powers in the absence of an unforeseen situation about the traffic crisis plaguing Metro Manila.

Roque read from the draft bill proposed by the Department of Transportation and noted that the list of emergency powers to be granted to the President under Section 5 of the proposed law were already provided for under the 1987 Constitution.

Section 5 of the proposed law reads: “The President/Executive Branch is hereby authorized to exercise powers necessary and proper to carry out the above-declared policy.”

The proposed law said the President and the heads of department and agencies under the executive branch related to the transportation sector are granted emergency powers to use government resources as well as executive actions to harmonize national and local projects to resolve the traffic crisis.

The bill also stated that the President and his agency heads should be unhampered by any law, regulation or procedure that would unduly delay addressing the traffic crisis.

“The President, along with the heads of the departments and agencies under the Executive Branch related to the transportation sector, are hereby granted emergency powers to urgently utilize all necessary government resources, employ executive actions and measures, and reconfigure and harmonize national and local government projects to address the traffic congestion crisis, unhampered by existing laws, regulations and procedures that would cause severe delay in addressing the said crisis,” according to Section 5 of the bill.

Roque said the President need no emergency powers to utilize all government resources.

He said there is no need for special powers granted by Congress for the President to employ executive actions and measures.
Roque added that the power  to be granted to Duterte to resolve the traffic crisis unhampered by any laws, regulations and procedures smacks of blanket authority that disregards existing laws.

“In effect, what you’re saying is we want to do our job, unhampered by the law, which is not a specific grant of emergency power but a blanket authority to completely disregard laws when you want to disregard laws,” Roque said.

“And that’s the problem… What is the specific power you want to exercise?” Roque added.
He said he can only see one specific request for emergency power, which was to exempt priority projects from public bidding and undergo direct contracting to speed up the completion of infrastructure projects that would ease the traffic congestion.

Roque said this is no longer necessary because the Government Procurement Reform Act already provides for emergency purchases.

He warned the department not to take constitutional powers lightly.

“Perhaps we should stop talking about emergency powers. Let’s talk about a Traffic Crisis Act, which would result in exemption of some of your purchases from the Government Procurement Act, but let’s not take constitutional powers lightly,” Roque said.

“The entire scheme of the Constitution is anchored on the three branches of government. And the emergency power is granted only under very brazen circumstances, when we want to unsettle the balance of power,” he added.

Transportation Undersecretary for Legal and Procurement Raoul Creencia told the congressman that the emergency powers would grant the President the mandate to solve the traffic crisis which existing laws failed to do.

“I agree that most of these are already in the law. But we have seen and we know that all of these are in the law six years ago, and look at where we are now,” Creencia said.

“That’s why we need a creative solution, but we need to address the constitutional issues raised by Congressman Harry. These laws were there six years ago but look at where we are now,” he added.

Creencia said the power of the President to go to direct or negotiated procurement would still be within the bounds of the Republic Act 9184 or the Government Procurement Reform Act.

The Department of Transportation presented to Congress its proposed draft of the bill that sought to grant Duterte special powers to solve traffic, which includes among others opening up the roads in the subdivisions to ease traffic congestion, go to direct contracting to speed up infrastructure projects, and resolve injunction and right of way issues delaying the implementation of infrastructure projects.

“In times of war or other national emergency, the Congress may, by law, authorize the President, for a limited period and subject to such restrictions as it may prescribe, to exercise powers necessary and proper to carry out a declared national policy,” according to Article VI, Section 23 of the 1987 Constitution. JE/rga