Trump tries to repurpose Clinton’s attacks against her 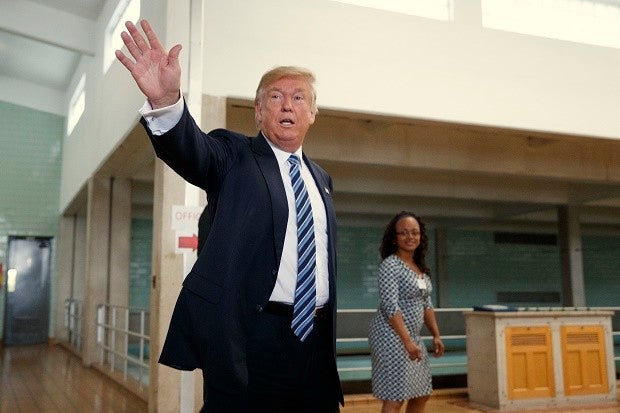 Those are the jibes Donald Trump has recently unleashed on Hillary Clinton. If they sound familiar, it could be because she’s lodged those very attacks on him throughout the campaign.

As he works to gain ground against Clinton in the final stretch of the presidential race, Trump is increasingly repurposing Clinton’s attacks against her. It’s a popular schoolyard tactic for the GOP nominee, a political game of “I know you are, but what am I?”

In the last few days, Trump and his campaign have repeatedly criticized Clinton for failing to provide specific policy proposals. That’s despite the fact that, by any measure, Trump has offered less detail on far fewer issues over the course of his campaign than Clinton, who has released so many policy proposals, her campaign published a book of them.

“Clinton is running a policy-free campaign. She offers no ideas, no solutions. And only hatred and derision,” he said at a rally Tuesday in Clive, Iowa.

It’s ironic coming from a candidate defined by divisive statements, who once mocked Clinton’s large policy shop, deriding her proposals as “a waste of paper” and insisting the public didn’t care about the sort of specifics she offered.

But it illustrates the way that the newly redesigned Trump campaign has embraced the technique of projection, slapping attacks back on his opponent, whether they fit or not.

“Essentially you’re delegitimizing their attack by simply muddying the water, and saying, ‘We’re all guilty, now what?'” said Martin. He said the tactic is especially effective in a fast-moving race, where few people step back to analyze the legitimacy of the charges.

“It’s almost like a political shortcut,” he said, “a strategy of, ‘Nope you’re guilty too, let’s move to the next question.'”

Early in her campaign, Clinton and her allies highlighted Trump’s most controversial comments to paint him as too crass for the job. Her campaign’s first attack ad featured children watching and reacting to a compilation of Trump clips.

“Next time you see Trump rant on television, think about all the children listening across America. Kids hear a lot more than we think,” Clinton recently said.

It’s a line Trump lifted this week, after Clinton said at a fundraiser that half of Trump’s supporters fit into a “basket of deplorables,” including racists and xenophobes.

“What should these parents tell their children about Hillary Clinton’s attacks?” Trump asked his audience in North Carolina. “To every kid in America tonight, I want you to know that your parents are working so hard to make your life better, and to make your country better.”

The same pattern has repeated over and over. After Clinton called Trump “temperamentally unfit” for the White House, Trump responded by defending his temperament and assailing hers. He’s accused her of being involved with Russia — despite his frequent praise of Russian President Vladimir Putin and his own campaign’s ties to the strongman. And he’s accused Clinton of starting the “birther” movement questioning President Barack Obama’s citizenship, when he was its most vocal proponent.

The most jarring example has come in Trump’s denunciation of Clinton, deeply popular among blacks, as a racist.

A day after her campaign announced that she’d be giving a speech linking Trump to the so-called “alt-right movement” — a modern evolution of white supremacy — Trump escalated his attacks, labelling Clinton as “a bigot who sees people of color only as votes, not as human beings worthy of a better future.”

Trump’s campaign did not respond to a request for comment. But Pastor Darrell Scott, the CEO of Trump’s National Diversity Coalition, said Trump was pushing minority voters to re-think their assumptions about Clinton and the Democratic party by asking what they had to lose by voting for him.

He said that, after listening to Clinton’s attacks, Trump had come to the conclusion that she was guilty of many of the charges she was lobbing. “In the black community, it’s called flipping the script,” he said.

The Rev. Dr. William J. Barber II, the president of the North Carolina NAACP and a Clinton supporter, said that if Trump really wanted to appeal to blacks, he would be embracing policies like strengthening the Voting Rights Act and supporting criminal justice reform, not attacking Clinton.

“Instead, what he wants to do is project onto Hillary Clinton what his own policies project onto him, attempt to deflect, and then insult the entire African-American community by suggesting that we have allowed a party to take advantage of us,” Barber said of Trump. “He tries pointing one finger at her, with all the rest of his fingers pointing at himself.”

Republican strategist Rick Tyler, who advised Texas Sen. Ted Cruz in his presidential bid, said projection can be effective — but Trump would be better served focusing on Clinton’s clearer vulnerabilities, including perceptions that she isn’t trustworthy.

“I think it’s a great tactic that’s misapplied,” he said. While conservatives have been waiting for someone willing to “give it back to the left,” he said, with Trump, “it doesn’t quite hold water, because most of the assertions he’s making against her, he’s guilty of. It’s tinged with a base alloy of hypocrisy.”