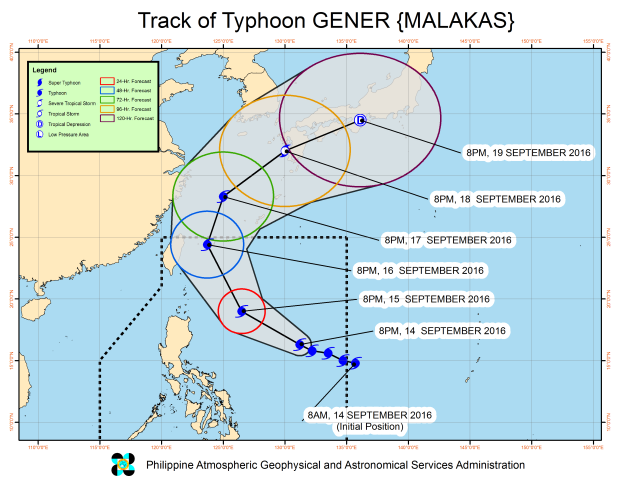 “As if an earthquake had shaken the capitol building,” Batanes Gov. Marilou Cayco said, referring to the howling winds of Typhoon “Ferdie” (international name: Meranti) that pummeled Batanes province late Tuesday night until early on Wednesday.

Packing peak winds of 250 kilometers per hour near the center, Ferdie is classified by the Joint Typhoon Warning Center as Category 5, or supertyphoon. It is described as the strongest tropical cyclone this year.

As Ferdie moved toward Taiwan on Wednesday, another typhoon, “Gener”  (international name: Malakas) moved into the Philippine area of responsibility. Gener was expected to hew close to Ferdie’s track and enhance the southwest monsoon.

Ferdie’s winds were strong enough to push open doors and windows, which were strapped closed with ropes, according to reports from Batanes’ capital town of Basco.

Cayco stayed at the provincial capitol to coordinate work of rescue and police teams she had placed on standby.

At 9:30 p.m. on Tuesday, residents said they could not sleep as winds howled. Power had been cut off since Tuesday.

When the typhoon eased on Wednesday morning, fishermen scrambled to rescue their boats at the port in nearby Ivana town.

Ferdie made a landfall over Itbayat island-town as it moved west northwest at 20 kph toward Taiwan.

In a press briefing on Wednesday afternoon, National Disaster Risk Reduction and Management Council (NDRRMC) spokesperson Mina Marasigan said Batanes continued to experience strong winds and sporadic rains, with communications to the province proving to be a “challenge.”

So far, no casualties or major floods and landslides had been reported, even in the northern Luzon provinces that it affected most, Marasigan said.

The NDRRMC has sent a team to Batanes to assess the typhoon’s impact even as travel was impeded due to rough weather conditions in Tuguegarao City in neighboring Cagayan province.

In Ilocos Norte province, residents of Barangays San Marcelino, Baresbes and San Francisco in Solsona town took a long detour to reach the town center after the Laureta bridge there was washed out by heavy rains and floodwaters.

Classes from preschool to high school have been suspended since Tuesday afternoon. Communication, water and power supplies, as well as operations at Laoag International Airport and Currimao seaport were normal.

Ten flights, including four international, were canceled on Wednesday, according to Manila International Airport Authority (MIAA). Canceled were China Airlines Flights CI 711 and CI 712, and Cebu Pacific Flights 5J 312 and 5J 313, all from Manila to Kaohsiung in Taiwan, and back.

Disaster officials have warned of continued winds and rain with the entry of Gener.

As of 1 p.m. on Wednesday, Ferdie was spotted at 315 km northwest of Basco, already outside the Philippine area of responsibility, while Gener was 1,225 km east of Baler, Aurora province, around 10 a.m.

Unlike Ferdie, Gener was not expected to make landfall, Marasigan said. It appears to be weaker based on the latest update from the Philippine Atmospheric, Geophysical and Astronomical Services Administration (Pagasa), with winds of up to 130 kph near the center and gusts of up to 160 kph.

Rainfall is expected to be moderate to heavy within a 400-km diameter cloud cover.

While no storm signal has been raised yet, Marasigan said the typhoon was expected to enhance southwest monsoon winds.

“The western side of the country, including Metro Manila, will experience continued rain especially as the weekend nears,” she said.

Gener is forecast to move northwest at 25 kph and is expected to be 750 km east of Aparri, Cagayan, today. It is forecast to leave the Philippines by Saturday morning.

Marasigan said rains the past few days in Mindanao, particularly in Davao and Caraga, were not due to the monsoon or the typhoons, but were “localized thunderstorms.”

She urged residents there to remain alert as rainfall the past few days had accumulated and might pose risks to flood or landslide.

Another low-pressure area has been spotted outside the Philippine area of responsibility, but the weather bureau expected it to remain at sea. With a report from Jeannette I. Andrade