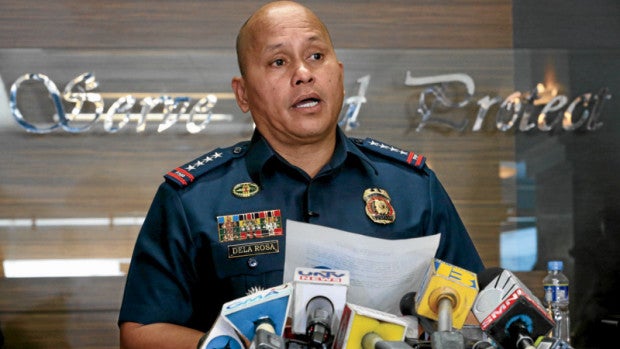 The police chief earlier said he was still unsatisfied with the PNP’s antidrug efforts as the number of surrenderers had reached plateau at 600,000 since he assumed office on July 1.

Statistics from the PNP showed that from July 1 to Sept. 14, 712,730 drug personalities, 659,868 users and 52,862 pushers had surrendered to the police in its nationwide implementation of “Oplan Tokhang.”

Drug suspects killed in legitimate police operations have increased to 1,506 while 16,891 have been arrested in 17,992 antinarcotics operations.

Meanwhile, the number of victims of vigilante-style killings has risen to 2,035.

The PNP has also visited close to one million houses of those in drug watch lists under Tokhang.

According to Dela Rosa, his frequent visits to police camps in different provinces are to “motivate the police” to “quadruple” their efforts in the drug war as the PNP is on its third month of the implementation of “Project Double Barrel.”