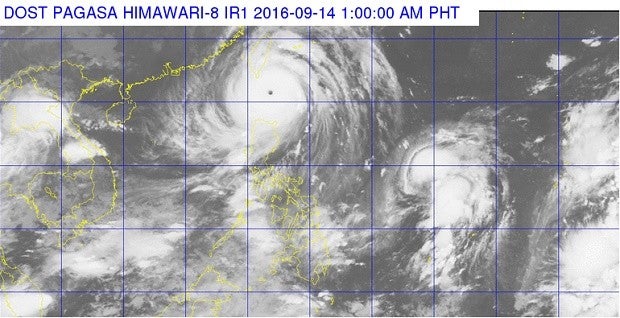 The state weather bureau said typhoon “Ferdie” is expected to exit the Philippine Area of Responsibility (PAR) on Wednesday afternoon, as storm warning signals were lowered.

In its 11 a.m. bulletin, the Philippine Atmospheric, Geophysical and Astronomical Services Administration (Pagasa) said Ferdie will leave PAR within the next two to three hours.

Signal No. 2 was hoisted over Batanes, while the Babuyan Group of Islands is under Signal No. 1.

Ferdie, which made landfall over Itbayat, Batanes on Tuesday night, was last plotted at 215 km Northwest of Basco, Batanes, as it moves west northwest at 20 kilometers per hour.

The typhoon has maximum sustained winds of up to 210 kph near the center and gustiness of up to 245 kph.

Typhoon Gener, meanwhile, was located at 1,225 km east of Baler, Aurora, as it moves northwest at 25 kph. It has maximum sustained winds of up to 130 kph near the center and gustiness of up to 160 kph.

Gener is not expected to make landfall.