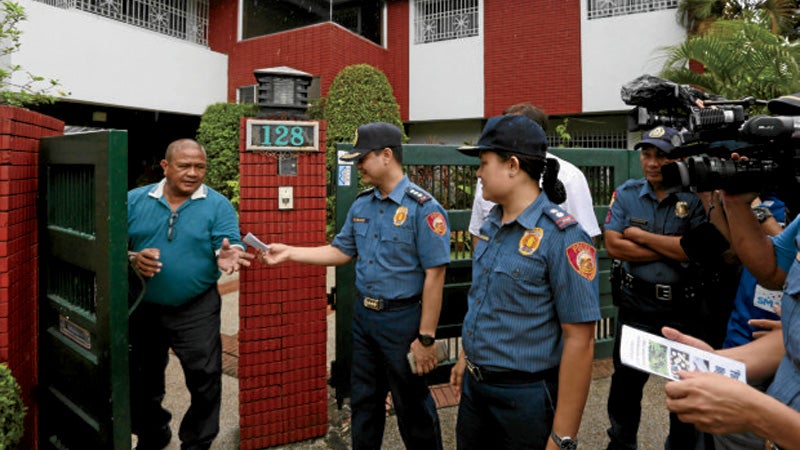 IT LOOKED more like a courtesy call or a neighborly visit than the dreaded “Oplan Tokhang” that usually has police operatives brandishing high-powered firearms, kicking down doors, turning houses upside down in search of illegal drugs, and herding people off to police precincts for a warrantless arrest.

On Tuesday, the Muntinlupa police chief, Senior Supt. Nicolas Salvador, led another campaign against illegal drugs, this time at the upscale Ayala Alabang Village in Muntinlupa.

But instead of guns, the small clutch of mostly female police officers distributed flyers on drug awareness and prevention to the wealthy homeowners, as well as on how to deal with bomb threats in crowded areas.

Salvador said most of the police officers deployed were females since “[they are] better when it comes to information drives and persuasion.”

Escorting him and his law enforcers were Barangay Ayala Alabang chair Ruben Baes and Ayala Alabang Homeowners Association president Antonio Laurel, who made sure that the uniformed guests were discreet as they knocked on some 100 houses along Madrigal Avenue and Batangas Street in Ayala Alabang.

Among the houses visited were those of former President Fidel V. Ramos, Sen. Panfilo Lacson and the “Alabang Boys”—Joseph Tecson, Richard Brodett and Jorge Joseph—who gained notoriety a few years ago for selling illegal drugs in the exclusive neighborhood.

But the civil and courteous conduct was for naught, as the police were greeted at the gates mostly by house help, who said the homeowners were not home, or by no-nonsense guard dogs who were less than welcoming of the guests.

Asked why it took the police so long to conduct its modified Oplan Tokhang in the village, Baes said the barangay had difficulty disseminating information about the campaign in the gated community, with more than 4,600 houses sitting on the 700-hectare land.

“Nobody wants drugs and we are one with the administration and the police in the fight against illegal drugs,” the village official added.

The police also visited the houses rented by two Chinese nationals who were allegedly involved in cybercrime and cybersex, according to a tip from the National Bureau of Investigation’s Cybercrime Division, Laurel said. 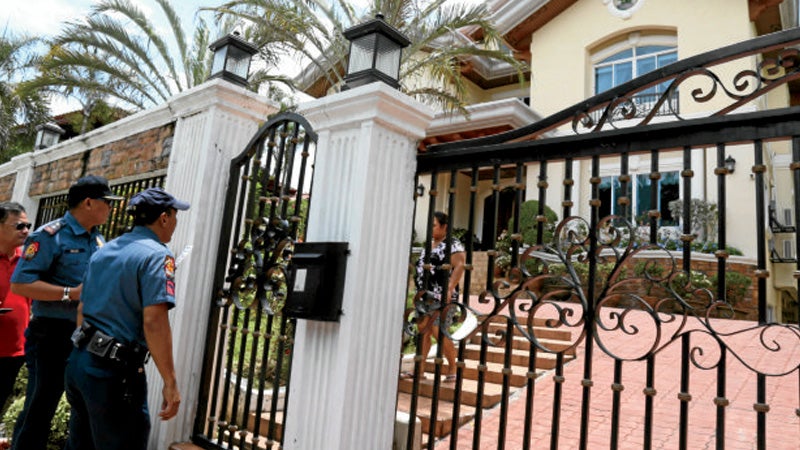 LACSON HOUSE Next stop for policemen under “Oplan Tokhang” at Ayala Alabang is this house of Sen. Panfilo Lacson. MARIANNE BERMUDEZ

But the house help in one of the residences said she had yet to know the name of her employer after six months on the job.

In 2012, Ayala Alabang made headlines when a drug laboratory run by five Chinese nationals was discovered by the police. In May this year, another lab manufacturing “shabu” (methemphetamine hydrochloride) in the village was raided and three Taiwanese nationals were arrested.

Asked about the reputation of the posh village as a haven for drug suppliers, Laurel said he considered it a “sort of compliment because (drug dealers think) they’re safe here. However, they do not know that all eyes of authorities would be on them [if they do illegal activities].”

To prevent such activities, Baes said the barangay council passed an ordinance for approval by the homeowners association that would allow the inspection of rented properties to determine any drugs-related or criminal activities.

“The association also has implemented a strict profiling of tenants, helpers and drivers, required accreditation from real estate brokers, and strict adherence to the rules on all applications for moving permits and vehicle stickers,” he said.

Read Next
Drug suspect ‘rises from the dead’
EDITORS' PICK
PH logs 20,755 new COVID-19 cases; no deaths reported again due to glitch
Urban poor struggle to adapt as rising seas threaten to remap Metro Manila
Don’t use military to threaten people, Robredo tells Duterte
Huawei’s relentless mission to bring ultimate health and wellness tracking for your fitness goals
Smart powers Liga Adarna Season 4: Race to the Top
Smart reaffirms 5G leadership as PH’s most reliable 5G mobile operator
MOST READ
Group rallies support for Robredo as she calls for a united opposition
Trillanes to give Robredo until last day of COC filing before finalizing presidential bid
Bong Go says he is not seeking presidency in 2022
It’s clear Marcos camp is afraid of Robredo after losing to her thrice — OVP spox
Don't miss out on the latest news and information.