Andanar owns up to PCOO blunders, vows not to repeat mistakes 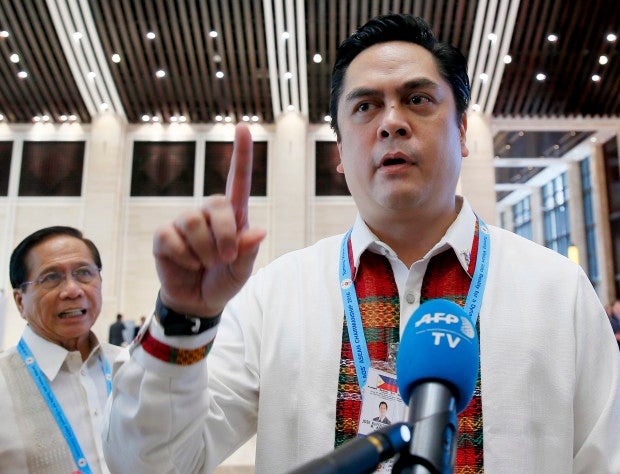 Presidential Communications Operations Office (PCOO) Secretary Martin Andanar on Tuesday owned up to the mistakes his office committed and vowed never to commit these again.

During the House of Representatives appropriations committee hearing the PCOO’s proposed P1.255 billion budget for 2017, Andanar was asked by Albay Rep. Edcel Lagman if the PCOO would commit to avoid the mistakes if Congress increases its budget.

Andanar agreed and held himself accountable for the blunders that the PCOO committed.

During the Asean summit in Laos, the PCOO announced that Duterte would be seated between US President Barack Obama and United Nations Secretary General Ban Ki-Moon at a gala dinner, after Duterte called Obama a “son of a b****” and Ban criticized Duterte’s war on drugs for its human rights violations. It turned out Duterte was seated between Russian Prime Minister Dmitry Medvedev and Indonesian President Jokowi Widodo.

Over the weekend, the Official Gazette also received flak on social media for posting a birthday card on Facebook for the dictator Ferdinand Marcos, whom the Gazette called the country’s “longest serving President” without mentioning Marcos’ declaration of martial law.

“We had lapses in our operations. These lapses happened, because of overzealousness of our staff at the Presidential News Desk even announcing the seating arrangement of Asean leaders, which we should not have been announced…. I accept full responsibility for that,” Andanar said.

“We also have lapses in a very big way, the blunder that happened a few days ago, when the operators of the Official Gazette omitted martial law… It’s very unfortunate. I did express that I was very upset during that night, and ordered our strategic communications office to place it back,” he added.

Andanar assured the committee that the office would improve its communication services on the back of President Rodrigo Duterte’s support to give the office editorial independence.

“I can assure you, chairman, Congressman Lagman, that those mistakes will never happen again,” Andanar said.

Bayan Muna Rep. Carlos Zarate cautioned the Gazette of giving the impression that it is “engaged in revisionist attempt to whitewash the dark years of martial law.”

In response, PCOO Assistant Secretary Ramon Cualoping said it is the office’s strategy to shed itself of political affiliations as the country’s lead repository of government documents.

“When we came on board, it was our strategic move to do away with political affiliations for the Gazette,” Cualoping said.

“It was quite unfortunate the accompanying copy for the birthday card of President Marcos had some nuances, which sparked negative reactions. And we understand. That’s why the first post has been deleted, and the second one updated,” Cualoping said.

Cualoping said he understood that the office has to listen to the reactions on social media due to the nature of the media to engage netizens online.

“Social is an engaging tool. We understand that before it’s a one way thing… Now it’s a two-way thing. People can respond and react. So we listened and understood, and we changed the post,” Cualoping said.

Andanar said he felt bad the Gazette was accused of revising the country’s martial law history, especially because it was his personal belief not to let the public forget the atrocities of martial rule.

“When I got wind of the news a couple of days ago, there was indeed a post about the birthday of former President Marcos. And the words ‘martial law’ and ‘exile’ were omitted. I immediately called our Assistant Secretary Cualoping who is in charge of the Official Gazette,” Andanar said.

“I ordered him to place it back. I said in my own words that you cannot change history. And myself, as a martial law baby, and a son of one those who fought the dictatorship, it was against my personal principle. But my personal beliefs are on the side, we are talking about history. We cannot just erase history,” Andanar added. JE