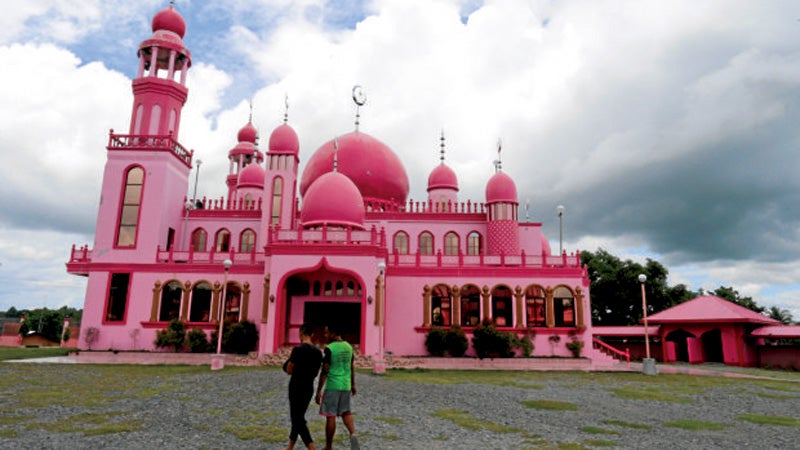 SPECIAL PRAYERS Muslims in Datu Saudi Ampatuan and neighboring towns in Maguindanao province are expected to converge at the PinkMosque this morning to offer special prayers during the Muslim holiday of Eid al-Adha. JEOFFREY MAITEM/INQUIRER MINDANAO

COTABATO CITY—Muslim leaders in the country have called on their constituents to shun extremism and draw inspiration from the story of Abraham, whose life and struggles are commemorated today by the world’s close to 2 billion Muslims on the occasion of Eid al-Adha.

Eid al-Adha, one of the two Muslim nonworking holidays observed in the Philippines, is the Feast of Sacrifice, which celebrates Abraham’s passing of God’s most difficult test of his faith—asking him to sacrifice his first born. When Abraham proved that he would really submit to the will of God, his son was spared and a ram was sacrificed in his stead.

At around 7 a.m. today, Muslim Filipinos pray in congregation and listen to a sermon from an imam.

After the special prayer, they gather and visit relatives. For those who are able to do so, a male cow or a goat will be slaughtered in the Islamic way, with prayers and expressions of pure intentions.

The meat is ideally divided into three parts: one each for the family, for friends and relatives, and for the less fortunate (as an act of charity).

“It is recommended that the special Eid prayer is done in an open space or field,” said Mohammad Nur Kadil, an assistant professor in Islamic religious studies at Ateneo de Zamboanga University.

“Eid al-Adha is observed in three days. The first is when the special prayer is done. The last two days can be allotted for slaughtering cows and for more time to celebrate with relatives,” he added.

In Lanao del Sur province, Gov. Bai Soraya Alonto Adiong underscored education for the youth and parents as a sustainable tool in efforts at sparing generations of young people from the menace of illegal drugs.

Maguindanao Gov. Esmael Mangudadatu said most Muslims abhorred violence, and urged worshippers in the Autonomous Region in Muslim Mindanao (ARMM) to offer supplication during the Eid al-Adha congregational prayers for the victims of the deadly Davao City bombing on Sept. 2.

Assemblyman Ziaur-Rahman Alonto Adiong of the ARMM’s Regional Legislative Assembly said, “Muslims should deeply reflect on the most beautiful story of sacrifice.”

He appealed to his fellow Muslims “to continue extending goodwill and friendship to Christians, who also believe in the Abrahamic tradition.”

Abul Khayr Alonto, newly appointed head of the Mindanao Development Authority, said Abraham had been looked up to by Muslims as the leader of humankind, because he was addressed in the Koran as the imam, which means “leader.”

Bangsamoro Grand Mufti Abu Huraira Udasan said that by performing hajj rituals, Muslims were retelling to their families and the world the great sacrifice and struggle of Nabi Ibrahim (alaihisalaam), as Abraham is addressed in the Koran.

Muslims and non-Muslims should bear in mind the lessons of Abraham’s story of faith tested in the greatest sacrifice told in a heavenly edict to take the life of his own child—and to realize that God, after all, holds human life so dear, said Udasan, who studied comparative Abrahamic religions in Jerusalem.

Scholars and students of comparative religions have taken significant notes on the supposed harmony of the Christian and Muslim Scriptures in the hajj rituals.

For instance, a ritual called sa’e, a seven-round jog to-and-fro the ancient Hills of Safa and Marwa (Kadesh and Bered in the Bible), is a reenactment by Muslims (men, women, young and old) of the struggle of the biblical Hagar, the first woman to receive divine inspiration, when she delivered Ishmael. (Genesis 16: 11-14)

Adiong said sa’e exemplified how Muslims held women in high regard because hajj could not be completed without paying tribute to Hagar, “the woman saved from persecution by a heavenly dialogue.”

Aside from slaughtering lambs, Muslims performing the pilgrimage reenact rituals or deeds attributed to Abraham, as his story of great leadership and love of family is told in the Bible (Genesis 22:12-19) and also in the Koran (2:124; 15:53 and 37: 101-107).

But followers of Abrahamic religions also speak of differences in retelling the patriarch’s story: The Muslims believe that Ishmael was the first born, whom God asked Ibrahim to offer as sacrifice, in accordance with the Hebrew tradition. The Christians believe it was Isaac, who was up for sacrifice by Abraham, and it was with Isaac that God made His covenant.

At the University of the Philippines in Diliman, Quezon City, five Muslim students, who stay at dormitories, share how Eid is observed and celebrated on the campus.

Ben Balt, who is from Iligan and president of the Muslim Students Association, said “being away from my family does not make me totally updated about what’s happening at home. I can only see photos of their celebration on social media and I miss how the Eid is celebrated there.”

For Noreen Zsarina Tanua, one difference between celebrating Eid al-Adha in UP and back home in Marawi City “is that I feel more free at home because I really know the people around me. I am more comfortable to eat different food.”

Alrahje Paute, originally from Cotabato, said it was a different feeling to be accompanied by parents in the special prayer when “I was younger. Now, I feel more independent and mature to have other companions in the prayer.”