No need for more powers–Duterte 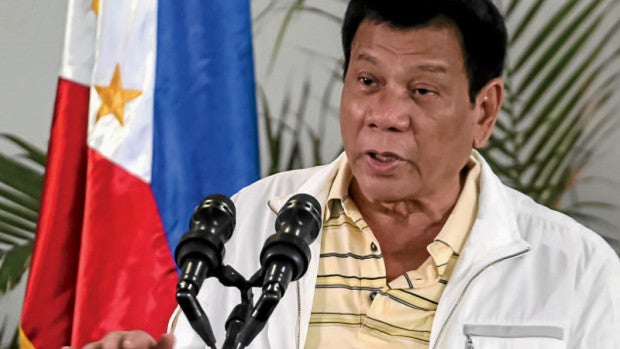 THERE IS no need for additional powers for President Duterte after he declared a national emergency on account of lawless violence in Mindanao following the deadly blast in his hometown, Davao City.

Duterte said he would use only the powers at his disposal as President to prevent and suppress violence in the country.

“We are in a state of lawlessness. I do not need any additional power. If you use the word, pang takot lang yan (that’s just to instill fear). I do not need it. I do not need anything except that you know that there is lawlessness in the country, period,” he said in a press briefing in Davao City on his arrival from his first foreign trip as President.

He said there were laws and measures he could use to keep the country safe.

“I will just exercise the powers of the presidency the natural way, law and order and stricter measures,” the President said.

Duterte made the statement following a proposal by Sen. Richard Gordon to give him the power to suspend the writ of habeas corpus and help fight terrorism and illegal drugs.

The President did not specifically mention Gordon’s proposal during the press conference.
Checkpoints necessary

Duterte also defended the security measures that would come with his declaration of a national emergency on account of lawless violence, such as checkpoints and more stringent security procedures at places like airports.

He noted that some people objected to checkpoints even as lawyers had been warning police they could be committing violations.

But being against random checkpoints could mean a person was hiding something.
He said these measures were necessary to catch people planning to commit violent acts.

“In a state of lawlessness, I feel that I have to do some extra mile of putting things in order,” he said.

The President said airlines could advise passengers to be at the airport earlier than usual to allow for more time to go through more stringent security procedures.

The President’s declaration enables him to call out the military, along with the police, to suppress lawless violence in Mindanao and prevent it from spreading and escalating in the country.

The proclamation remains in effect until it is lifted by the President.

Under the guidelines for the proclamation, the military and police would be deployed to major thoroughfares and crowded areas, such as airports, shopping malls and transport terminals.

Duterte issued the proclamation after an explosion ripped through the Roxas night market in Davao City on Sept. 2, killing 14 people and injuring 67 others./rga