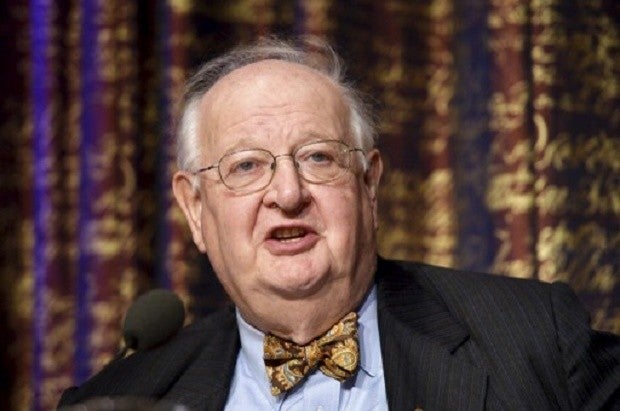 Laureate of the 2015 Nobel Prize in Economics sciences Angus Deaton speaks at a joint press conference at the Royal Swedish Academy of Science in Stockholm, on December 7, 2015. Laureates are in Stockholm where the Nobel Prize Award Ceremony takes place on December 10, 2015. AFP

In an interview with AFP, the British-US poverty expert warned that the Republican candidate in November’s US elections was “not a good voice” for those neglected by the global movement towards economic and financial integration.

Nor, added the Princeton University professor, is a so-called Brexit likely to benefit its supporters.

Inequalities have grown since the 1970s and become more marked with a globalization drive that hits certain parts of the population, mainly in rich countries, Deaton told AFP, on the publication in French of his 2013 book “The Great Escape”.

“If we don’t deal with that, if we don’t somehow make globalization benefit those people too or we share the prosperity that comes through globalization, then I think that we are in considerable danger,” cautioned the 71-year-old Nobel laureate.

And populist politicians such as Trump in the United States, or Britons’ unexpected decision in June to slam the door on 40 years of European Union membership are “part of the result of not handling globalization well”, he said.

“Trump is not a good voice for those people.

“I don’t think Brexit is going to help people in Britain,” he added, saying however that globalization was not solely to blame.

“A lot of people in America and Europe feel that their governments are not representing them very much,” Deaton said.

The academic, who has spent more than 30 years in the United States, won the Nobel Economics Prize last year for his groundbreaking work on poverty.

He was honored for using household surveys to show how consumers, particularly the poor, decide what to buy, and how policymakers can help them.

Hailed for its eloquent writing and deep research, “The Great Escape” outlined how overall human welfare — especially longevity and prosperity — has risen spectacularly over time, even though the inequality gap between rich and poor has widened.

Times of weak economic growth exacerbate the problem, while the bailing out of banks after the 2008 financial crisis, the worst economic turbulence since the Great Depression, still lingers bitterly in people’s memories, he said.

“If you think about those bailouts that happened in 2008, that was a situation in which the government gave at our expense enormous sums of money to some of the richest people who have ever existed on Earth,” said Deaton.

“And I think that many Americans are very, very angry about that still.”

“Not that they would have liked the whole economy to crash, but they feel these people have misbehaved in one way or another and they were being richly rewarded for it while they got very little or in fact they got unemployment,” he added, pointing to inadequate regulation of financial institutions.

Political fundraising in the US, which Deaton described as “really crazy”, is also to blame, he said, with elected politicians spending around eight hours every day raising money.

“The result, of course, is that they spend most of their time worrying about the interests of the people whose money comes in.”

The European Union is also leaving its citizens feeling disillusioned, he said.

“The European project has become problematic (because it’s) now pushing to the point that people think that their interests are not being taken into account.”