In Iloilo, a village tries to erase drug face 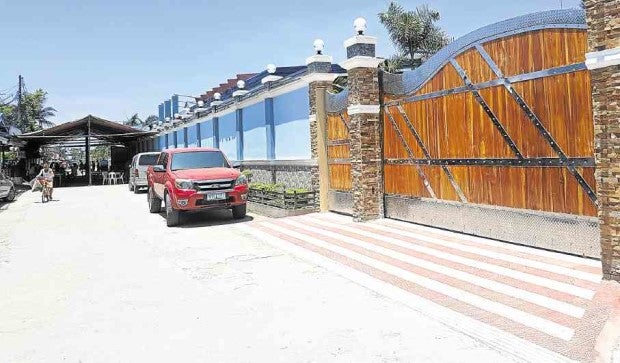 THE ODICTA compound in Iloilo City straddles at least two villages. One of the barangay, Tanza-Esperanza, is trying to erase its image as a drug haven. NESTOR P. BURGOS JR/INQUIRER VISAYAS

Manny dela Cruz was forced to transfer his son from one of the expensive private schools in Iloilo City to a public high school.

“He was being bullied. Schoolmates taunted him that his parents could be involved in drugs because we are from Tanza-Esperanza yet managed to send him there,” Dela Cruz, also a village councilor, told the Inquirer.

He said his son’s former schoolmates probably did not know that he was a businessman selling ready-to-wear clothes while his wife worked in London.

“It’s unfair that many judge us because of our address,” Dela Cruz said.

Barangay Tanza-Esperanza has long been known as a haven of illegal drugs in the city.

In a 2015 year-end report, the Philippine Drug Enforcement Agency (PDEA) in the Western Visayas region identified the village, along with Bakhaw, Desamparados, South San Jose, Monica and Boulevard, as “major areas of concern” due to the presence of drug users and pushers.

These villages are among 61 of the city’s 180 barangays (representing 34 percent) penetrated by illegal drugs, according to a report of then PDEA Western Visayas director, Paul Ledesma.

Tanza-Esperanza, along with neighboring Barangay Malipayon, is where the sprawling compound of slain suspected drug lord Melvin Odicta is located.

An unidentified gunman shot and killed Odicta and his wife, Meriam, minutes after they disembarked from a ship at the Caticlan port in Malay town in Aklan province on Aug. 29. Investigators believed the Odictas’ killing is related to illegal drugs.

Police had identified Odicta as alias “Dragon,” the supposed leader of one of two main drug groups operating in Western Visayas.

The Odictas’ deaths have again put Tanza-Esperanza on the spotlight.

The six-hectare village, with more than 3,000 residents, spans Delgado and Rizal Streets. The community is near schools and hotels.

In recent years, it had been likened to a “mall” for drug users and pushers.

“People from all walks of life came and went 24/7. Even in the middle of the night, people were rushing in and out,” a resident of a neighboring village told the Inquirer.

A taxi driver, who spoke to the Inquirer on condition that his name would be withheld, said that before the recent crackdown on illegal drugs, drug dens proliferated in “Espe,” the village’s moniker.

He said “shabu” (methamphetamine hydrochloride) could be easily bought from drug dens along the village’s narrow and crisscrossing alleys and path walks.

Users could then consume the drugs inside the rooms laid out for addicts. “The waiting time [for an available room] was oftentimes long because of the number of users,” the driver said.

A checkpoint, equipped with a steel barrier and guarded by village watchmen, used to block the main road near a portion of the concrete fence surrounding the Odicta compound.

Village officials said they set up the checkpoint and barrier as part of security measures after a group of unidentified persons entered the village and fired indiscriminately a few years ago.

The Iloilo City police took down the barrier shortly after the government’s massive campaign against illegal drugs was launched in July. 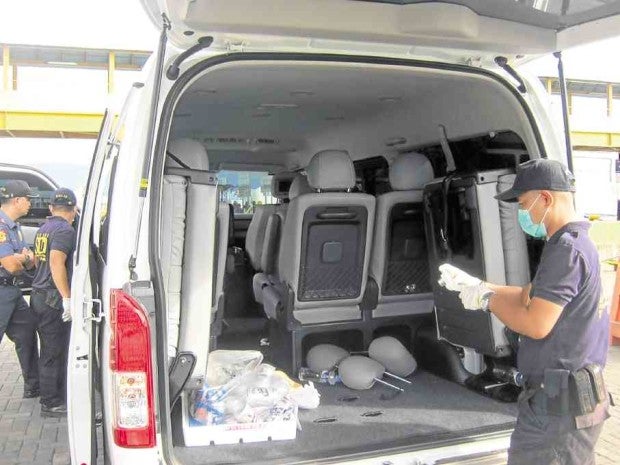 A POLICEMAN inspects one of two vans rented by the Odicta couple which was intercepted at the Batangas City port following reports that its occupants carried guns. PHOTO FROM CALABARZON PNP

Tanza-Esperanza officials said they have campaigned against the illegal drug trade in their village but admitted the problem has persisted.

“They (pushers and users) just wait for us to turn our backs,” said village chief Noel “Nene” Odicta, younger brother of Melvin.

Speaking on behalf of the Odicta family, Noel sought forgiveness for the “sins” of the couple, but insisted that family members left by the couple behind were innocent.

He vowed to clear his village of illegal drugs.

“I will end this [problem] and clean our village. We will also try to do this within six months, like [what] President Duterte [had promised],” he said.

Dela Cruz said village officials are implementing a 24-hour monitoring scheme in entry and exit points of the barangay.

“All those with no legitimate reasons going here are investigated. Complaints of vagrancy will be filed against them,” he said.

Even as they vowed to cleanse their communities of illegal drugs, village officials in the city and residents said they grieved over the death of the Odicta couple, especially Melvin.

“I don’t use drugs. But [Melvin Odicta’s] death was a big loss to us because he was someone who we could run to for help. He never declined [any request for] help,” said an elderly pedicab driver.

Despite his reputation as a dreaded drug lord in Western Visayas, a region composed of the provinces of Iloilo, Capiz, Aklan, Antique and Guimaras, Odicta was generous to his neighbors, especially during times when they needed money for hospital and burial expenses and other emergencies.

“He helped us with the building of concrete pathways, drainage system and other projects. He was our Robin Hood,” said a resident, who asked not to be identified.

Law enforcement officials said they believed Odicta’s death would weaken the illegal drug trade in Western Visayas even though other groups and drug lords continue to operate in the region.

But many residents of Tanza-Esperanza are hoping that the general perception of their village as drug-infested would be erased soon.

“It’s unfair to us. We have workers as well as lawyers, doctors, nurses, seafarers and other professionals here. Most residents here are not involved in illegal drugs,” said Dela Cruz.