She almost shot the sheriff, say cops in Manila eviction 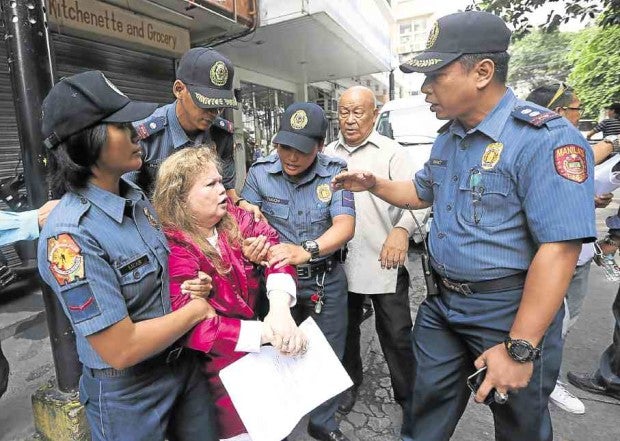 ERMITA ARREST Marilou Balwart is secured by members of the Manila Police District led by Station 5 commander Supt. Albert Barrot (right) after she allegedly tried to fend off a court sheriff’s team with a “bang.” MARIANNE BERMUDEZ

A businesswoman is facing charges after she allegedly fired a gun when told by a court sheriff and the police to pack up and leave a hotel in Manila on Friday.

A MPD team went to see Balwart to enforce an order from Manila Metropolitan Trial Court Branch 24 for her to leave the building.

The court case involved a property dispute between Rhema International Livelihood Inc., a company owned by Balwart, and Nessian Hostillery Group Inc., according to the MPD.

But in a document posted on the building’s entrance, Balwart insisted that Nessian, represented by Ernesto Vergel de Dios, had yet to reply to the motion for reconsideration that she filed on Aug. 19 to appeal the court order

Therefore, the notice to vacate could not yet be enforced, she argued in the document.

According to Barrot, Balwart initially tried to negotiate outside the building with court sheriff Benny Dela Vista, whose team arrived around 8 a.m. The team included about 40 policemen.

But several minutes into the talks, Balwart went inside the building and locked herself in. “At one point, she pointed the firearm at the team, so they scampered away,” Barrot said.

Two shots were later heard from the building. No one was reported hurt.

“She was inside the building for three to four hours, until she came out and finally surrendered,” Barrot said.

The MPD said a shotgun was later recovered inside the building and that it would be subjected to ballistics tests to determine if Balwart fired it that morning.

Balwart remained in detention as of press time.